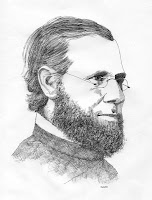 Pretiosa in conspectu Domini mors sanctorum eius (“Precious in the sight of the Lord is the death of his holy ones,” Psalm 116:15). For centuries (until the late 20th-century reform of the Roman Rite), that verse was recited virtually every day of the year at the canonical hour of Prime, following the reading of the Martyrology. It is in any event a fitting meditation on this 124th anniversary of the death of Servant of God Isaac Hecker (1819-1888), founder of the Paulist Fathers.


In the contemporary ordination rite, the bishop instructs the newly ordained priest to conform his life to the mystery of the Lord’s cross. This instruction is connected with the presentation of the people’s gifts to be offered to God. Sometimes, however, the challenge of the cross comes in such a way as to take one away from a more active ministry with people.  Although Hecker is listed as Paulist General Superior and parish pastor from 1858 through his death in 1888, the last period of Hecker’s life (beginning around 1871) was dominated by physical illness and emotional suffering. Thus, not unlike the experience of some other religious founders - St. Francis of Assisi (+ 1226) in the 13th century, St. Alphonsus Liguori (1696-1787), the founder of the Redemptorists, in the 18th, and Blessed Jeanne Jugan (1792-1879), the foundress of the Little Sisters of the Poor, in Hecker’s own 19th century, Hecker’s last years saw a radical reduction in ministerial activity that challenged him to surrender himself totally to the Lord.


Even so, Hecker continued to contribute to the Catholic World, for example, and even attended (briefly) the Third Plenary Council of Baltimore in 1884. Throughout the 1880s, he engaged in written polemics on issues of great contemporary importance to the Catholic community. In conspicuous contrast to the secular press, he strongly supported the Papacy in its ongoing dispute with the Kingdom of Italy (“the Roman Question”), and he pressed forcefully for Catholics’ right to run their own separate school system – both of which issues he argued for in the specifically American language of freedom of religion.


In late 1874, which convalescing in Europe, he began his essay An Exposition of the Church in view of recent Difficulties and Controversies and the Present Needs of the Church, eventually the first chapter of Hecker’s final book, The Church and the Age, published the year before his death. The latter work offers Hecker’s final and mature formulation of his core convictions about the Holy Spirit, the Church, the evangelization of America, and American democracy, which he had developed and articulated over the years of his active ministry.


The aging Hecker was also actively involved in the design and construction of the present Church of Saint Paul the Apostle in New York. He insisted, for example, that the nave be at least 60 feet wide, that there be no seats in the side aisles (thus assuring an unobstructed view of the High Altar from all the pews), and that the only outside light to enter the church come from above.” In his last years, he had a small oratory built between the Paulist house and the new church, with a window opening into the sanctuary, so he could watch High Mass on Sundays and feast days.
Also Hecker had ambitious ideas for  possible Paulist participaiton what today we would call the “new evangelization” of Europe. While in Europe in 1875, he wrote: “In the United States the Church is advancing gradually and surely to a great triumph. It is in this work of the Church in Europe at the present moment that I am conscious with an overwhelming conviction that divine Providence calls me to labor. The Church in the United States is the offspring of the zeal, sacrifices, and blood of the Church in Europe, and shall not the child in gratitude repay the parent in the time of her trial, distress, and danger?”
The reality competing with Hecker’s bold vision was, in the words of one of his more recent biographers: “the struggling life of the Catholic Publication Society, the modest success of its Sunday School paper, the tiny improvement in Paulist affairs evidenced by the resumption of the missions, and the growth of the parish, where Deshon and Young were trying to find the money to build a scaled down version of the ‘basilica’ Hecker had planned earlier” [David O'Brien, Isaac Hecker: An American Catholic, p. 260].
Not for the first time in the history of religious life in the Church, it would fall to others – notably Augustine Hewit and George Deshon – to translate Hecker’s vision into functioning human institutions, among them St. Paul the Apostle Parish in New York and the Paulist Fathers around the country and extending even into Canada.
Ultimately, his illness intensely focused Hecker on the one thing most important – his relationship with God – ultimately a greater and more important thing than anything one ever does in life. To his closest disciple and confidant, Wlater Elliot, Hecker expressed himself in sentiments that evoke St. Thomas Aquinas’ famous experience shortly before his death in 1274: "There was once a priest who had been very active for God, until at last God gave him a knowledge of the Divine Majesty. After seeing the majesty of God that priest felt very strange and was much humbled, and knew how little a thing he was in comparison with God” [Elliot, Life of Father Hecker, 1891, p. 380].
Finally, on Saturday, December 22, 1888, Isaac Hecker died. In his eulogy at the funeral four days later, the Jesuit Provincial recounted the scene at Hecker’s deathbed, when his fellow Paulists asked for his final blessing. Hecker "roused himself from the depth of pain and exhaustion, and his ashen lips which death was sealing pronounced the singular words … 'I will give it in the shadow of death.' His feeble hands were raised, and like a soldier dying on the field of battle he reconsecrated his followers in the name of the Father, Son, and Holy Ghost for the struggle in which they had chosen him as Leader."
In the first period of his life, Hecker, animated by a conscious appreciation of God’s Providence, allowed himself to be guided by the Holy Spirit, whose presence and action he discerned in God’s providential care for him, and which he received the grace to recognize and follow in the Roman Catholic Church. In the second period of his life, his enthusiastic embrace of the Church led him away from mystical self-absorption to an active vocation as a priest and religious and formed him, through the crucible of opposition and suffering, into a thoroughly committed “man of the Church” (as New York's Edward Cardinal Egan called him in 2006). In the third period, this “man of the Church” concentrated on the Church’s perennially essential mission of evangelization, both within the Church and outward to the world – planting his vision in the solid soil of the first American men’s religious community and their growing New York parish . Finally, in the last period of his life, he learned (in the wise words of my own novice master) to look beyond the consolations of God to the God of all consolation. He surrendered himself - and all his activities - to the call to conform his life to the mystery of Christ’s Cross – filling up, in the words of his patron, St. Paul, what is lacking in the afflictions of Christ, on behalf of his body, which is the church” [Colossians 1:24].
Through it all, Hecker, as he wrote to a friend, lived in hope: “Living and working in the dawning light of an approaching, brighter, more glorious future for God’s Holy Church. A future whose sun will rise first on this continent and spread its light over the world.”