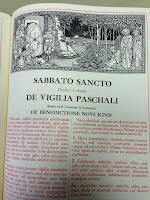 In The Sign of Jonas, Thomas Merton (1915-1968) wrote of Holy Saturday: "The Night Office of this day is bewildering. The confusion of sorrow and joy is so complex that you never know where you are. The responsories might have been composed by James Joyce All the associations of terms and symbols are thrown into confusion. One responsory starts out with Jerusalem ... and you are all set to be glad, and you are told to mourn. Then in the end, speculatively, you find that you are saved. This is the product of the historical curcumstances through which the Holy Saturday liturgy has passed"
Merton wrote those words on April 15, 1949. He was referring, obviously, to the un-reformed Holy Saturday liturgy of those days. Of that un-reformed state of afairs, Philip J. Goddard, himself no great fan of our contemporary liturgy, has written: "Over the course of time the most important liturgical function of the entire year had become, so far as the faithful were concerned, merely a series of arcane and largely incomprehensible rites carried out very early in the morning by the clergy in churches empty of all except the odd liturgical enthusiast. It also involved the anomaly of celebrating the first Mass of Easter before the formal conclusion of Lent at midday. It is something of a wonder that this indefensible state of affairs was allowed to continue for so many centuries before the celebration of the Vigil was restored to its proper time." (Festa Paschalia: A History of the Holy Week Liturgy in the Roman Rite, 2011, p. 278).

It may have been an "indefensible state of affairs," but it has certainly left its mark on the character of Holy Saturday. Pius XII's 1955 reform aimed at setting that all right again, but of course, human behavior is hard to change. The new rubrics were dutifully observed, and more people than in the past (but probably nowhere near so many as on Holy Thursday and Good Friday) attended the restored Vigil. On the other hand, the idea of Holy Saturday as an "aliturgical" day never really caught on. The Easter Vigil, which was theoretically supposed to end with a Mass starting at about midnight, was widely anticipated at the earliest legally allowable hour (as early as 6:30 in one cathedral in the 1960s). This made for greater convenience, of course, for those reluctant to be out so late at night (even at a time when people were still flocking in great numbers to Midnight Mass at midnight on Christmas). It meant that decorating churches with elaborate Easter floral arrangements could be done late Saturday evening instead of sometime after midnight. Most of all, it created the idea - or rather re-inforced the existing older idea - that the Easter Vigil was a liturgy of Saturday rather than of Sunday.

It's quite clear in the current rite that Holy Saturday is the second day of the "Easter Triduum," and that the Easter Vigil is part of Easter Sunday, the third day of the Triduum. But that too is largely just jargon to "all except the odd liturgical enthusiast." It hardly helps that in the current rite the Vigil is really somewhat vestigial, and the ceremony appears essentially structured as an extra-long Saturday evening Mass.

Official language continues to plead that festive customs and practices connected with the former anticipation of the Resurrection on Saturday morning should be re-tooled. But that is now almost beside the point. Apart from the blessing of Easter food particularly popular in some ethnic communities, most such folkloric customs are themselves dead, dying, or largely vestigial themselves - thanks mainly to modernization, urbanization, and secularization. Meanwhile, even among the devoutly observant, Holy Saturday - far from being the day of prayer and fasting, focused on Crhsit's death and descent among the dead, that the Roman Missal enjoins - has become a day of feverish activity in anticipation of Easter. By rights, the church should remain bare until the Gloria, when the bells are rung and the statues uncovered. In fact, however, in most places the statues have been uncovered and the church itself festooned with flowers since sometime Saturday morning. As for fasting,  Vatican II's insistence that the paschal fast be prolonged through Holy Saturday (Sacrosanctumn Concilium, 110) has apparently been largely forgotten. (In one community where I was once briefly assinged, the feasting actually began on Good Friday evening with a grand - albeit meatless - seafood dinner celebration with several guests!)

It's eminently understandable, of course, that, back when Lent was taken seriously as a season of fasting, people were tired of it by then and eager to anticipate Easter a day early. And, despite the effective abandonment of Lenten fasting, that same mindset still seems to perdure today.

So this morning - after dutifully celebrating the Office of Readings and Morning Prayer in the church, at which we heard the Office's wonderful ancient homily depicting Christ's descent to the domain of the dead - I enjoyed a big buffet breakfast next door, before joining my dedicated parish volunteers in a morning of festive decorating. Then this evening, when it is still very much Saturday in our ordinary way of thinking, we will ring bells and sing Alleluia.

It is a very strange day indeed - but wonderful in its own way!