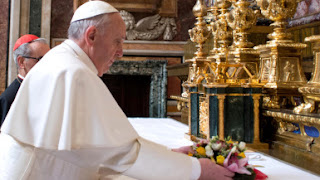 "You know that it was the duty of the Conclave to give Rome a Bishop.  It seems that my brother Cardinals have gone to the ends of the earth to get one... but here we are... I thank you for your welcome. " With these words, the 76-year old, Jesuit Archbishop of Buenos Aires, Jorge Mario Cardinal Bergoglio, now Pope Francis, stepped out not just onto the loggia of St. Peter's Basilica but onto the world's stage.

The 1st Pope from the New World, the 1st from Latin America (where almost half the world's Catholics actually live), the 1st from the "Global South" (where the Church is vibrant and growing but where the overwhelming majority of people remain poor), the 1st Jesuit ever elected Pope, and finally the 1st Francis - it's a very long list of "firsts." Much energy will be expended in the days and weeks and months to come unpacking the larger, long-term meaning of those "firsts."
As I wrote yesterday, it is more than about time for a Latin American pope. What a joyful moment this is - not just for the 501 million Catholics that live in Latin America and for the Latino immigrants that are forming the future of the Church in the United States, but for the whole Church, whose universality has again been demonstrated and displayed to the world, as the first non-European in more than a millennium assumes the throne of St. Peter.

Then there is his chosen name - so evocative of the poverello of Assisi.In the near-term, I think the new pope's choice of name may speak most eloquently to today's world. St. Francis of Assisi (1181-1226) is one of the Church's most famous and most widely loved saints. To his contemporaries, St. Francis seemed to personify more closely than anyone else what Jesus was about. (That identification was further confirmed in popular opinion two years before Francis's death by the unprecedented gift of the stigmata). In our affluent developed world, St. Francis permanently challenges us to hear again the Gospel Jesus preached as good news to the poor (Luke 4:18). What we know about Pope Francis' life and ministry in Argentina certainly suggests that message is close to his heart and will likely be a focus for his pontificate. St. Francis sought to fulfill the mission he received from the crucifix at San Damiano to rebuild the Church. What Francis was about was “New Evangelization” – to meet the needs of the 13th century. With St. Francis as a model, Pope Francis (pictured above making his first visit to the Papal Basilica of St. Mary Major) will now lead the Church in the “New Evangelization” – to meet the new needs of the 21st century.