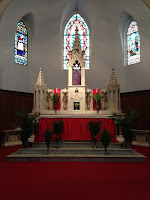 Holy Week, for those of us who live and work in full-time parish ministry, may have a way of getting excessively hectic and seemingly out of one's abillity to manage one's timel. That was certainly the case in my experience in seminary where everything - and especially Holy Week, tended to be overdone. However, that was int he 1980s. On the other hand, it has been my experience since then that, with proper planning (and the necessarily familiarity in advance with what actually needs to be done), one can actually find time to devote - as one should devote - to one's own spiritual appropriation of Holy Week.

In that spirit, having spent much of the morning helping redden the church and getting the palms ready, and the Passion books ready, etc., I have this Palm Sunday Eve begun re-reading Pope Benedict XVI's 2011 Holy Week volume of his Jesus of Nazareth trilogy.
Benedict begins his treatment of the Palm Sunday story by linking the immediate goal of Jesus's journey to Jerusalem, his geographical ascent to the Holy City, with his ultimate goal of his priestly self-offering in his ascent to the Cross. Of course, even more obviosuly that the biblical texts themselves, the liturgy leads us in that direction directly by its juxtaposition of the palm procession, recalling Christ's triumphal entry into Jerusalem and the Mass that follows, focused completely on the Passion account.
Twenty years ago, on what was my second day in Israel, my former novice director took me to a village in Samaria for the 1st Mass of a newly ordained local priest. We all gathered at the village boundary around an arch of palm branches and balloons and waited there for the new priest’s entry into his hometown. As the procession began and all the villagers started shouting and waving palms in the air, my former novice director smiled and said: now you see what Palm Sunday looked like! (Presumably without the balloons!) The new priest's triumphal entry into his hometown was on foot, but Jesus entered on a donkey, which, Benedict reminds us, represented an acting-out of the enthronement ritual of Davidic kingship - thus pointing to the Messianic hope associated with David. I think Palm Sunday gives us a good look at the ambiguity of that messianic hope, seemingly shattered shortly thereafter on the Cross, only to make way for a more all-encompassing kind of hope which no one in the Palm Sunday crowd - either the disciples or the pilgrims who joined in the acclaim for Jesus - could yet have anticipated. We are so used to Holy Week that I wonder whether we really recognize how full of surprises it is!
Benedict's book, besides illuminating so many interesting features in the story, situates it firmly in relation to our own Holy Week. The early Church, he points out, read the Palm Sunday story as an anticipaiton of the Church's liturgy. "Just as the Lord entered the Holy City that day on a donkey, so too the Church saw him coming again and again in the humble form of bread and wine. ... As pilgrims, we go up to him; as a pilgrim he comes to us and takes us up with him in his 'ascent' to the Cross and Resurrection, to the definitive Jerusalem that is already growing in the midst of this world in the communion tha tunites us with his body."