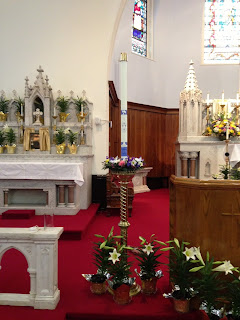 Luke’s gospel [Luke 24:1-12] tells us that on that first Easter Sunday morning, in response to strange nonsensical-sounding news brought by Mary Magdalene and others, Peter ran to the tomb, saw that it was empty, and went home amazed at what had happened. John’s gospel [John 20:1-9] tells us that both Peter and John ran to see the tomb and also found it empty, but did not yet understand the scripture that he had to rise from the dead. Peter’s amazement and the disciples’ lack of understanding should not surprise us. We may suppose that the idea of resurrection makes little sense to our modern, scientific way of thinking. But in fact it made just as little sense to Jesus’ contemporaries, his disciples included. In his 2011 book on the subject, Pope Benedict XVI  said: “Anyone approaching the resurrection accounts in the belief that he knows what rising from the dead means will inevitably misunderstand those accounts and will then dismiss them as meaningless.”

Maybe that’s why none of the gospels give us an actual description of the event itself. Artists have tried to picture it, of course, but that’s art - highly imaginative art. We have nothing either visual or verbal that depicts the actual event of Jesus’ resurrection. What we do have, however, both visually and verbally, are the resurrection’s effects – first of all on the disciples, and then on the world, and finally on us.
Its effects on the disciples are what we read and hear in the gospel stories of the visits to an empty tomb and then later of the appearances of the risen Lord – and still later in the preaching of Saint Peter and others in the Acts of the Apostles and in the amazing response of those who heard their preaching, and finally in the testimony and letters of Saint Paul, who wasn’t there at all at Easter, but who eventually experienced the risen Lord himself and was forever changed as a result.
Its effects on the world were immediately evident in the short term in the enthusiastic response of Jews and pagans alike to the amazing story the apostles told. In the long term, its effects have been equally dramatic in how the story has spread and the Church has grown as a result, in the dynamism that is at the heart of the Church’s existence in the world and that has propelled it outward in almost 2000 years of world-transforming activity.


Finally, its effects are evident in us, transformed in mind and changed in heart, by the unique power of this utterly unexpected event, which has glorified (almost beyond recognition) the humanity Jesus shares with each of us, and which has brought us together in a way in which nothing else could have, empowering us not so much with new knowledge as with a new hope.  (If “knowledge is power,” hope is even more so.)
The resurrection is God’s powerful alternative to business as usual.  None of us were there that first Easter – and, had we been, we would surely have been as amazed and uncomprehending as the disciples themselves. But without yet understanding it, the world awoke on Easter to something totally new. Thanks to the fact that Christ has risen from the dead, the Christian faith offers an alternative to business as usual, offering instead to the entire world - and to each and every one of us in it - an invitation to hope. It is the power of that faith and hope that has brought us, whether here and now or a long time ago, to the water of baptism, and that brings us back Sunday after Sunday to hear the rest of the story and to experience the presence of the risen Christ in the breaking of the bread and his power in the new people he is transforming us into and the amazingly wonderful things that we can now do with one another and for the world as a result