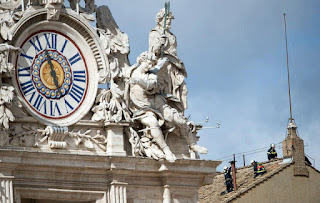 My parochial vicar is confident this will be a short conclave. I am not quite so certain. But, either way, we’ll know soon enough! Meanwhile, midway into the second day and after three thus far inconclusive ballots, speculation continues. And the longer it goes on, of course, the more speculation there will be about why. Perhaps it is inevitable that a vacuum of actual information invites speculation and gossip.
The longest papal selection – in Viterbo in 1268 - lasted over two years, resulting in the modern (i.e.,strictly enclosed) procedure of the papal conclave. The longest conclave in recent centuries was that of 1740, which went on for 181 days. (Four cardinals died during it!) The 1758 conclave lasted 53 days. The 1769 conclave lasted 94 days. That of 1774-1775 lasted 133 days. (Two cardinals died during that one!) The 1799-1800 conclave, the last outside of Rome (then occupied by Napoleon), lasted 105 days. That of 1823 lasted 27 days. The 1829 conclave lasted 36 days. That of 1831-1832 lasted 51 days.

So, starting in the mid-19th century, conclaves have become significantly – and consistently – shorter. No one seriously expects a contemporary conclave to go on for more than 5 days. (That would be 17 ballots!) Even though the cardinals now come from all over the world and may not all know each other all that well, the presumption is that most of the serious papabili are already more widely known – or certainly have become better known during the interim between the vacancy of the Apostolic See and the start of the conclave. And, of course, the pace of modern life is so much faster today that a lengthy conclave would probably be seen as intolerable to modern sensibilities and would likely project an undesirable image of the Church as very divided internally. Inevitably, as I said above, a vacuum of actual information invites speculation and gossip - all the more so a prolonged (by modern standards) vacuum of information invites speculation and gossip. So the factors contributing to a shorter conclave are many. The only real question then is how short? The 1939 and 1963 conclaves had clear frontrunners, whose accession to the papal throne was widely anticipated. If not quite the obvious frontrunner, Cardinal Ratzinger was in 2005 certainly a frontrunner, certainly the best known and one of the most widely respected members of the sacred college. So his selection was hardly surprising. In retrospect, Cardinal Roncalli in 1958 and Cardinals Luciani and Wojtyla in 1978 were also serious contenders internally, although their elections were certainly not widely anticipated on the outside.
Meanwhile, the world waits, and hopefully ma learn something about the virtue of patience in the process! As I wrote yesterday: cut off from the world, the cardinals must make their choice, however long that takes. Cut off from further insider information, we in the world must await their choice, however long that takes.