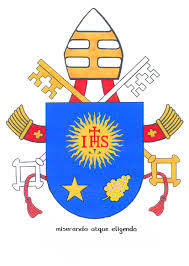 In anticipation of Pope Francis’ Inaugural Mass as Bishop of Rome and Universal Pastor of the Church, the new papal coat of arms (pictured here) has been revealed, an adaptation of his earlier episcopal coat of arms (see below). The shield, now surmounted by a miter and the crossed keys of St. Peter, includes the emblem of the Jesuits – a bright sun with the monogram HIS in its center and a cross above and three nails below the monogram. Below the Jesuit emblem, on the heraldic right side of the shield (the left side from the viewer’s perspective) is a star, symbol of Mary. Opposite the star on the heraldic left is the spikenard plant, which in Spanish tradition is a symbol of St. Joseph, the Patron of the Universal Church, on whose feast day the new Pope will celebrate his inaugural Mass.

But particularly interesting to me is the Pope’s motto – the same one he had in his arms as bishop and cardinal. The motto, Miserando Atque Eligendo, is derived from a homily by a medieval English monastic saint, the Venerable Bede (673-735). The homily concerns the calling of the apostle St. Matthew and is read in the Divine Office on the feast of St. Matthew (September 21). The relevant section is “Jesus saw Matthew, not merely in the usual sense, but more significantly with his merciful understanding of men. He saw the tax collector  and, because he saw him through the eyes of mercy and chose him, he said to him: Follow me.”


Apparently, the young Jorge Bergoglio felt he had had a special experience of God’s loving mercy calling him to religious life in the Society of Jesus. Years later, in remembrance of that experience of religious calling, when he was to be ordained a bishop Bergoglio chose those words from St. Bede as his episcopal motto. They remained on his episcopal, then cardinalatial (see below), and now papal coats of arms.
I think those words from St. Bede serve as a vivid reminder - not just to members of religious communities concerning their particular vocations - but to all in the Church, that we are all who we are and able to do whatever we do thanks entirely to the uniquely merciful way God looks on us and empowers us to collaborate with him in the advancement of God's kingdom on earth. That's a very good starting point for thinking about the New Evangelization, which is first of all premised on our gratitude for God's mercy to us and our readiness to imitate Jesus in "his merciful understanding" of our fellow men and women.