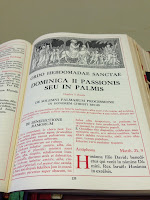 It's that time of year again, and today's the day to pick up our palms - safely stored since their delivery in a local walk-in refrigerator in readiness for this weekend. Palm Sunday, as I suspect everyone knows, is one of the most popular days in the church calendar. The Palm Sunday Mass is certainly among the best attended. It is, in fact, not only a great introduction to Holy Week but is actually a kind of compendium of it, since (in addition to the Blessing of Palms and Procession) it includes the solemn proclamation of the Lord's Passion, which tells virtually the whole Holy Week story. So someone who pays attention on Palm Sunday hears the Holy Thursday and Good Friday stories too.

It is, however, undoubtedly the palms that remain the day's biggest attraction. I can well remember my mother carefully weaving crosses of palm to be reverently attached to the crucifix or some other sacred image in every room in our apartment. I can also remember in the first year of  Pius XII's 1955 reform of Holy Week - Palm Sunday 1956 - how a neighbor got all upset because he went to an early Mass and got no palms because none would be blessed till the Solemn Mass. That would soon be "corrected" in future years, allowing an anticipatory palm blessing for early Mass goers. But it did capture one of the aims of Pius XII's reform, which was to de-Gallicanize the Palm Sunday liturgy and return it to an older Roman emphasis on the Passion. This was reflected even in the new title the reformed Ordo Hebdomadae Sanctae assigned to Palm Sunday - Dominica II Passionis seu in Palmis ("The Second Sunday of the Passion, or also Palm Sunday").


An American liturgist was once quoted as saying that, in the Roman liturgy, “all the fun things came from Gaul” - a reference to the influence of the medieval “Gallican” rites on the ancient Roman rite. In fact, the traditional Roman Rite, prior to the 1960s, was in many respects really a hybrid of the ancient Roman and the medieval “Gallican” rites.
One of those “fun things,” we can thank the “Gallican” rites for is the Palm Sunday procession. Originally, a feature of the 4th-century Jerusalem liturgy, it migrated from there to medieval Europe. The standard Palm Sunday processional hymn, Gloria, laus, et honor (“All Glory, Laud, and Honor”) composed by Theodulph of Orleans around the year 820, is one vestige of that elaborate medieval ceremony. The hymn's length (originally 39 verses) attests to the length of elaborate medieval Palm Sunday processions. It took time, however, for this emphasis on the palms to catch on in Rome. There, the last Sunday of Lent had been focused primarily on Christ’s passion, its distinctive feature not the palms but the chanting of the Passion according to Matthew. Eventually, a missa sicca (i.e., a duplicate liturgy of the word with Matthew’s Palm Gospel), followed by an elaborate blessing of palms and procession, came to precede the Mass at which the Passion was solemnly sung. .Pope Pius XII’s reform of Holy Week radically simplified this, putting the official (if not the popular) emphasis back on the Passion, a development further affirmed in the 1969 Roman Missal now in use.
Like so much such bureaucratic liturgical archeologism, however, the attempted change has never really caught on outside the formal rubriics. Hardly anyone (except liturgists) refers to the day by its current official title, "Palm Sunday of the Passion of the Lord." Most seem to stick with its historical and traditional name, "Palm Sunday." And what seems to excite people - to the extent that anything liturgical excites people anymore - is still the palms. As for the long Passion reading, I sometimes wonder whether many perhaps perceive it as yet one more final lenten penance. Seldom anymore do many people get to hear the Passion proclaimed in its unique and dramatic traditional chant, sung by three deacons at three different speeds and pitch levels. Nowadays, many must settle for  a monotonic (and often poorly performed) reading, relieved only by the brief pause when everyone gets to kneel at the equivalent of the traditional Emisit spiritum. That pause also qualifies as one of those Gallican liturgical “fun things,” a monastic practice whose diffusion is attributed to Charlemagne's son Lous the Pious (778-840).

One of the prayers for the Blessing of the palms in the old (pre-1955) liturgy asked that all who received the palm may obtain protection of soul and body (ut, quicumque ex ea receperint, accipiant sibi protectionem animae et corporis). Another prayed that those who dwell where the palms are brought may obtain blessing and protection from all adversity (in quemcumque locum introducti fuerint, tuam benedictionem habitatores loci illius consequantur et omni adversitate effugata, dextera tua protegat). There are no such expressions in the new (post-1969) Palm Sunday prayers. Even so, the sentiment seems to have survived in the popular devotion that surrounds receiving the palms, taking them home, and keeping them there throughout the year. I don't weave palm crosses myself. But, in the absence of anyone to weave one for me, I still keep at least a plain branch of blessed palm in sight all year long.

Many in our society today label themselves "spiritual but not religious." Perhaps we might well label the popularity of Palm Sunday as "religious but not liturgical"!