"And the Word Was Made Flesh" 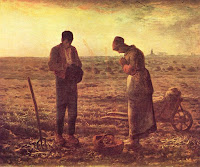 Today the Church belatedly celebrates the Annunciation of the Lord (transferred this year because of Holy Week and Easter from its usual date on March 25, nine months before Christmas).The Church invites us to contemplate the great mystery of the Incarnation of the Word-made-flesh in a special way on Christmas and on the Annunciation - ritualizing that in the genuflection at the Et incarnatus in the Nicene Creed. Of course, those of us above a certain age can remember when we genuflected (and knelt at sung Mass) at every occurrence of the Et incarnatus whenever the Creed was said or sung (e.g., every Sunday).

Back in March 1965, when the genuflection was pointlessly abolished in the early stages of the 1960s' liturgical demolition, my mother commented that hardly anyone would be likely to remember to do it on the two days (Annunciation and Christmas) when it was still to be retained! I don't think I have ever forgotten it. But, of course, even if one did ever forget it, there is a reminder. The command to genuflect is written right there in red in the Missal: "The Creed is said. At the words and was incarnate all genuflect."

Genuflecting at those words in the Creed is an important - and easy - way of ritually highlighting the centrality of the Incarnation. So was the daily genuflection we used to make when the priest read John 1:14 in the Last Gospel - and whenever else that verse occurred (e.g., in the Angelus).

In fact, the Church invites us to contemplate the great mystery of the Incarnation of the Word-made-flesh in a special way not only on Christmas and on the Annunciation but three times daily through the regular recitation of the Angelus, a centuries-old prayer consisting of scriptural verses recalling the Annunciation, three Hail Marys, and a concluding prayer that relates the Incarnation to Christ’s passion, death, and resurrection. The Angelus is traditionally recited (kneeling, if possible, and standing on Sundays) at morning, noon, and evening - except during the Easter season, when the Regina Coeli is recited (standing) in its place.

Presumably most people who ever had any art history in elementary school are familiar with Jean Francois Millet's famous painting L'Angelus (Photo). In the 1980s, a colleague (apparently auditioning to be one of religion's "cultured despisers," to use Schleiermacher's great expression) sarcastically renamed the painting "Peasants looking for a contact lens." That probably says more about whatever contemporary elites he was aspiring to identify with than it does about the peasants in the painting!

Like Friday abstinence from meat (another casualty of the disasters of the 1960s), the Angelus is one of those customs that deliberately inserts an awareness of something bigger and better than one's immediate commercial and personal preoccupations into otherwise ordinary life's secular rhythm. They both originated in a time when such insertions seemed more natural and were widely practiced. If anything the value of such practices is even greater now, when ordinary life and its secular rhythm have increasingly become virtually bereft of any transcendent purpose whatsoever!
Posted by City Father