Places to Worship in Truth and Beuty

Yesterday, I welcomed to my church a local group from the American Institute of Architects, who were doing a walking tour of five historic downtown churches. It was a great honor that Immaculate Conception was included as one of the five - and the only Roman Catholic Church among the five.

I have been very fortunate in my 20 years of priesthood to have been attached for many of those years to two beautiful churches - a very large and beautiful one in New York and a small and beautiful one here in Knoxville. In both I experienced how the beauty of a special place, set aside for divine worship and reverently so maintained for 130 years, is itself a powerful expression of invitation and welcome.

Founded in 1855, Immaculate Conception is the oldest Catholic parish in the city of Knoxville. The original church, built that same year, was a small but beautiful stone structure that was a credit to both the faith and good taste of the small but vibrant Knoxville Catholic community. The growing community quickly outgrew its original church, however, and 30 years later built the present Victorian Gothic structure, dedicated in September 1886. The justifiable satisfaction of the parish community in what they accomplished is evident in the famous photo taken one week after the dedication of the present church, in which pastor and congregation posed in front of the soon-to-be demolished original church. (The loss of that older structure was surely tragic, but probably unavoidable given the constraints on space that - then as now - limited the parish's possibilities.) 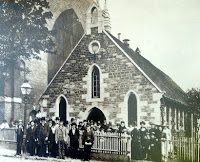 There is a reason why we build beautiful churches. From time immemorial, human beings have dedicated and set aside from profane uses special places in which to express the distinctly sacred character of humanity's relationship with God.  An special contribution of Christianity to this universal human activity has been the need to construct temples that are not only sacred sites set apart for one single purpose but also (in order to achieve and reveal that purpose) are designed for a congregation to assemble within them. For the church building, besides being a house of God, is a house likewise for God's People, themselves being built up like a building and of whom the church building is itself a fundamental image.

So the magnificence and beauty of a church building not only offers human honor to God but also expresses the beauty which we believe attaches to the Church community itself, as the Body of Christ continuing the Risen Lord's life and work in the world. What a privilege it is, therefore, to build a beautiful church, to worship in one, to minister in one!

And what a sadly missed opportunity whenever a church is artistically impoverished because of short-sighted considerations, however rationalized by the spirit of an ugly time!