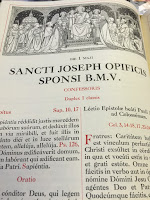 Tomorrow is May Day, the International Workers' Holiday in much of the world since the 19th century. In the Church's calendar it is also (were it not a Sunday - and in the "Extraordinary Rite" even on a Sunday) the feast of Saint Joseph the Worker (Sanctus Joseph Opifex).

Some 20 or so years ago, I recall being asked to celebrate a May Crowning on May 1. Now, back when I was growing up in the 1950s, May Crownings were usually held towards the end of the month, but nowadays a date early in the month seems to be preferred. Fair enough, I suppose. But at the time I protested (meekly) that on May 1 we really should be focusing on Saint Joseph. The response I received to that modest suggestion, however, was one of complete indifference. In fact, from its invention in 1955, the feast of Saint Joseph the Worker - probably one of Pope Pius XII's least successful of his many liturgical innovations - has been met with widespread indifference. (It never helped either that for us here in the US, "Labor Day" comes in September, not on May 1.)

The May 1 Feast of Saint Joseph the Worker is actually quite illustrative as an example of a rationalistic liturgical reform that never resonated with the organic development of the liturgy. As an abstract, rationalistic proposition, it made perfect sense, since in modern times May Day has become the recognized holiday of the international workers' movement. The old Second Nocturn of Pius XII's Office for the feast actually alludes to that - plainly political - motivation.  Most aptly has the Supreme Pontiff ordered this feast to be celebrated on the first of May, a day which the workers have adopted as their own

But, of course, the international workers' movement had grown up quite apart from any Church connection. The choice of May 1 as the Workers' Holiday had absolutely nothing to do with the liturgical calendar or even with the multitude of cultural and folk traditions associated for centuries with May Day. Meanwhile, until 1955, the Latin Church had celebrated the Apostles Philip and James on that date, presumably because it was the anniversary of the dedication of the Roman basilica that contains their relics (the Church of the 12 Apostles). The politically motivated invention of the feast of Saint Joseph the Worker necessitated moving Saints Philip and James to the next free day, which was then May 11. In the Paul VI calendar promulgated in 1969, Saints Philip and James got moved again - this time to May 3, a date now free thanks to the discarding of the Feast of the Finding of the Holy Cross.

But perhaps more of a liturgical loss than the disrespect accorded the Apostles Philip and James by ignominiously bouncing them around the calendar was the permanent elimination of the slightly older (but conceptually richer) feast of the Patronage of Saint Joseph, extended to the Universal Church by Blessed Pope Pius IX in 1847 - and then, in 1870, after Saint Joseph was named patron of the Universal church,  raised to the highest rank and awarded an octave. Originally on the 3rd Sunday after Easter, it was finally reassigned to the 3rd Wednesday after Easter in the 1911 liturgical reform of Saint Pius X. And there it stayed - until it was unceremoniously eliminated to make room for the newly invented feast of Saint Joseph the Worker.

Looking up references to the two feasts, I found these interesting observations by Gregory DiPippo on New Liturgical Movement (May 1, 2014):

The references to the Patriarch Joseph as an Old Testament type of Christ’s foster-father are indeed one of the most beautiful features of the old Office and Mass of the feast of St Joseph, Patron of the Universal Church. The Church often applies to him the words “Ite ad Joseph – Go to Joseph”, from the words which the Pharaoh spoke about the Patriarch in Genesis 41, 55, telling the people of Egypt to ask him for grain during the great famine. These words are quoted in the second responsory of Matins, which in the first nocturn sums up the story of how Joseph became “as it were, the father of the king, and the lord of all his house”. The Epistle of the Mass, Genesis 49, 22-26, applies to St Joseph, as the heir of the Old Testament Patriarchs, the words by which Jacob blesses his son Joseph before his death, “The blessings of thy father are strengthened with the blessings of his fathers: until the desire of the everlasting hills should come; may they be upon the head of Joseph, and upon the crown of the Nazarite among his brethren.” Already in the fourth century, Paulinus of Milan, the biographer of St Ambrose and a faithful follower of his teaching, explains the “desire of the everlasting hills” to be Christ Himself. (De Benedictionibus Patriarcharum, X, 15; P.L. XX 730C)

In contrast, contends DiPippo, the liturgical texts of St Joseph the Worker are a clumsy set of pieces, quite inferior to those of the earlier feast.

In any case, the old workers' movement, which Pius XII's feast was a liturgical effort to co-opt, is largely a thing of the past. But, as the current presidential campaign has demonstrated, the need for response to the deplorable social decline of the "working class" very much remains. For many people in our society - many who in an earlier era would have been beneficiaries of the labor movement - things have been getting noticeably worse since the very difference circumstances under which the feast of Saint Joseph the Worker was invented.