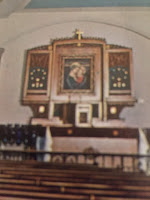 The devotion to Our Mother of Good Counsel apparently originated in the town of Genazzano, Italy, where the Augustinians have had a monastery since the Middle Ages. At some point, the friars were invited to take over a local parish church dedicated to Our Mother of Good Counsel. According to tradition, on April 25, 1467, the famous image of the Blessed Virgin Mary and the Child Jesus first appeared in the church. Legend has it that this same image had previously been venerated under a different title in Albania, but suddenly disappeared when Albania was being invaded. From Albania the image travelled on its own to Genazzano, where it acquired the name associated with the parish church. In more modern times, Pope Leo XIII added the invocation "Mother of Good Counsel" to the Litany of Loreto and elevated the church in Genazzano to a Minor Basilica. Pope Saint John XXIII visited the shrine prior to the second Vatican Council, as did Pope Saint John Paul II before reestablishing the Catholic Church in Albania after the fall of communism.

The collect for the Mass of The Blessed Virgin Mary, Mother of Good Counsel (found in the Proprium Missarum Ordinis Fratrum Sancti Augustini) aptly expresses the permanent salience of this devotion: Lord, you know that our thoughts on earth are full of fear and uncertainty; through the intercession of the Blessed Virgin Mary, from whom your son took flesh and blood, send us the gift of counsel to teach us how to discern your will and to guide us in all we do.