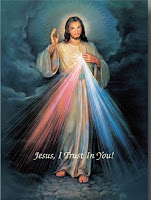 Since the Great Jubilee 16 years ago, tomorrow's 2nd Sunday of Easter has been celebrated as Divine Mercy Sunday, a celebration which takes on added significance in this Extraordinary Jubilee Year, this Holy Year of Mercy. On this day, a plenary indulgence is granted under the usual conditions (Confession, Communion, prayer for the Pope’s intentions, and a spirit of complete detachment from affection for sin) to those who take part in prayers and devotion in honor of Divine Mercy or who, in the presence of the Blessed Sacrament, recite the Our Father and the Creed, adding a devout prayer to the merciful Lord Jesus (e.g., “Merciful Jesus, I trust in you!”). In addition to informing the faithful of this opportunity, pastors are encouraged to lead the recitation of these Divine Mercy prayers and to encourage the faithful to practice the works of mercy (all even more appropriate and timely during this Holy Year).

So I am never shocked when I see this or any other popular devotion downplayed by its cultured despisers (if I may employ Schleiermacher's famous phrase). Just recently, I was given a copy of a recent issue of Worship, which I have often read in the past but which admittedly tends to appeal to a more academic kind of constituency. The journal contained an interesting article, "The Centrality of the Paschal Mystery in the Missal of Paul VI," which surveys the changes in the liturgies of Holy Week, the Sacred Triduum, and the Easter season initiated by Pius XII and completed under Paul VI. It discerns an "overarching paschal vision connecting Ash Wednesday to Pentecost through Palm Sunday and the Triduum," which the author calls "one of the glories of the Missal of Paul VI," in contrast to which the previous rite (now the Extraordinary Form of the Roman Rite) "has nothing comparable."

On the whole, I agree with the author's assessment. There is a great logic, an "overarching paschal vision," which informs the new rite's approach to Holy Week and Easter. As to whether that logic has really and practically penetrated people's piety after almost 50 years, of that I am somewhat less convinced. Nor is logic everything - especially in an area like liturgy which is so ultimately symbolic and emotive.

In this regard, I can remember years ago once being encouraged to avoid as much as possible certain forms of "church speak" if one really wanted to connect with a congregation. And one of the examples given of such alienating "church speak" was "paschal mystery" - an expression I doubt that many Easter Sunday worshipers would readily recognize or easily understand! (Calling it the "Easter mystery" may be a bit better, but not much.)

However that may be, I was more disconcerted - but sadly not so surprised - by the author's evident distress about the addition of seu de divina Misericordia as a subtitle for the 2nd Sunday of Easter, and the complaint that Divine Mercy Sunday has become this Sunday's name "for a large segment of the Catholic populace."

But before bureaucrats and academics took over the liturgy, what made sense "for a large segment of the Catholic populace" was largely how liturgy and devotions developed and evolved. The devotion to the Divine Mercy, which concentrates on the mercy poured forth in Christ’s death and resurrection, has its origins in private revelations received in the 1930s by St. Faustina Kowalska (1905-1938), a Sister of Our Lady of Mercy, in Cracow, Poland. In her diary, St. Faustina wrote: “the Lord permitted me to see the immensity and greatness of His mercy. If souls could only realize how much God loves them! Earthly human understanding is only a pale shadow of the reality!” But, in his homily at St. Faustina’s canonization on April 30, 2000, Pope Saint John Paul II pointedly referred to the fact that St. Faustina’s mystical experience corresponded to the tumultuous period just prior to World War II: “those who remember, who were witnesses and participants in the events of those years and the horrible sufferings they caused for millions of people, know well how necessary was this message of mercy.”

The celebration of the Divine Mercy on this 2nd Sunday of Easter highlights the connection between the message of Divine Mercy and the Easter mystery of our redemption, which is the greatest revelation of Divine Mercy toward us. It is significant that the Gospel account read each year on this Sunday (John 20:19-31) speaks of the Risen Christ’s gift of his peace, of the Holy Spirit, and of the forgiveness of sins. “Peace be with you. As the Father has sent me, so I send you. … Receive the Holy Spirit. Whose sins you forgive are forgiven them.” The Church, which continues Christ’s life and mission in the world, is intended to be the merciful sign and instrument of the forgiveness and reconciliation Christ acquired for us by his blood. And, in the sacramental life of the Church, the sacrament of Penance (which is so especially emphasized during jubilee years) is the special sacramental sign of God's mercy making possible the forgiveness of sins after baptism.

Again, paraphrasing Pope Saint John Paul, those who remember the events of the past 100 years and the horrible sufferings they caused for so many millions of people, can well appreciate this translation of "paschal mystery" into the language of God's mercy, forgiveness, and peace.