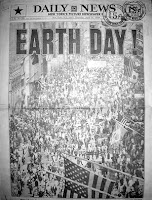 Last week's celebration of Earth Day 2016 reminded me of when "Earth Day" was new and exciting. I can remember attending its first celebration in Central Park in 1970. But, long before the invention of Earth Day, we had for centuries had Rogation Days!

From the reign of Pope Saint Gregory the Great until that of Paul VI, April 25 (which, for some reason, was widely also thought to have been the date on which Saint Peter first arrived in Rome) was observed in the Roman calendar as one of the four annual Rogation Days. The April 25 celebration was known as the Litanaie majores (the "Greater Litanies"). The other three Rogation Days (the Monday, Tuesday, and Wednesday before the Ascension) were known as the Litaniae minores (the "Lesser Litanies") and were of ancient Gallican, non-Roman origin. I have previously written here [Cuckoo Day April 25, 2012] about the pre-Christian roots of the "Greater Litanies" in the ancient Roman Robigalia festival, one of ancient Rome's significant spring agricultural commemorations.

As I noted on this day four years ago:

Ancient peoples appreciated their dependence on the natural seasons and the harvest. The change in religion redirected the focus of people's prayers to the true Creator God. But that didn't change their dependence on nature or their need for a successful harvest or the value of ritualizing that on traditional days.

I also suggested that, in the light of contemporary environmental degradation and the dangers to human civilization posed by climate change's devastating effects:

Perhaps a rationalized late 20th-century Roman Liturgy's abandonment of such reminders of our connection - and dependence - on nature wasn't such a smart idea, after all.

Neither the pre-conciliar liturgical movement nor the Second Vatican Council itself ever explicitly anticipated the abolition of the Rogation Days, prior to their disappearance in Paul VI's 1969 liturgical demolition. There was, admittedly, in certain quarters a view that the Rogation Days were not "in harmony with the spirit of Easter," and there were proposals to eliminate some and transfer others (cf. the 19th meeting of the Pontifical Committee for the Reform of the Sacred Liturgy, April 29, 1952). More modestly, the 1960 rubrical reform of Pope Saint John XXIII, while making no change regarding April 25,  made the "Lesser Litanies" optional in private recitation of the Office and gave Local Ordinaries the faulty of transferring them to three other successive days which might seem more suitable locally (General Rubrics, 87, 90).

On the other hand, expressing the deeper spirit and  sense of the 20th-century liturgical movement, the esteemed Pius Parsch wrote: "The four Rogation Days have preserved the main elements of this venerable rite [the ancient Roman stational observance], an observance that we should respect and foster. for we should pray both perseveringly and in common, since special efficacy and power is attached to such prayer."

No less than the calamities of Gregory the Great's time, today's environmental and other woes seriously threaten the Church, our world, and the planet itself. The case for recovering what was frivolously discarded half a century ago is, if anything, even more obvious than it was then!