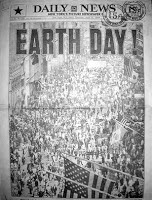 I have always had a certain fondness for Earth Day, perhaps because I can so vividly remember participating in the first Earth Day celebration in 1970 (photo). Back then it was fun (as a lot more things were back then). Now, however, as the calamitous consequences of climate change become more incontrovertibly evident (even as our current government's response to it stands out for its increasing ignorance and stupidity), the occasion seems so much more somber. Certainly the theme for this year - Environmental and Climate Literacy - could hardly be more timely!

Since I started this blogging routine, Earth Day has also served as a suitable occasion to recall - and mourn the loss of - the Church's traditional Rogation Days, which traditionally were observed on April 25 (the "Greater Litanies") and on the three days before the Ascension (the "Lesser Litanies"). I have previously written here [Cuckoo Day April 25, 2012] about the pre-Christian roots of the "Greater Litanies" in the ancient Roman Robigalia festival, one of ancient Rome's significant spring agricultural commemorations.

As I noted back then,  ancient peoples appreciated (so much better than we) their dependence on the natural seasons and the harvest. The change in religion from paganism to Christianity redirected the focus of people's prayers to the true Creator God. But that didn't change their appreciation of their dependence on nature, or their need for a successful harvest, or the catechetical value of ritualizing that on traditional days. And so I also suggested that, in the light of contemporary environmental degradation and the dangers to human civilization posed by climate change's devastating effects, perhaps the bureaucrats who invented our late 20th-century Roman Liturgy may have made a critical mistake in their abandonment of such reminders of our connection - and dependence - on nature. Today's environmental woes (famines, droughts, floods, storms, fires, etc.) and the many social and political crises and conflicts which stem from them wholly or in part seriously threaten our physical world and the human architecture of civilization that has made our planet special. Having been so frivolously discarded half a century ago, the Rogation Days are undoubtedly gone for good, but the case for recovering and retrieving their spirit seems to me to be, if anything, even more obvious than it was then!