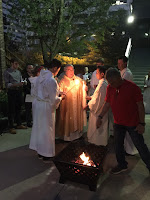 The sacred liturgy is, well, sacred. So it should not be "reviewed" as if it were the latest movie or play. Still, it is meant to be experienced, and how it is experienced is worth considering. Having attended holy Week and Easter services all my life and having been their principal celebrant for several years now myself, my experience inspires me to share my accumulated thoughts, which is, of course, all they are - my personal thoughts.

But not all Triduum liturgies are equal. The best attended - for most people probably the only one they attend - is, of course, Easter Sunday morning Mass. For its popularity alone, Easter morning Mass deserves to be any priest's favorite Triduum liturgy. It is where the people actually are. It is the one time the Easter story is actually proclaimed to a real crowd - as Peter got to do on Pentecost. And, for those of us who are old enough to remember, it is one of those rare occasions when the church is actually filled - as churches used to be routinely filled Sunday after Sunday just half a century ago.

Palm Sunday is not quite as well attended as Easter any more (nor is it part of the Triduum) but it is still big for lots of people and so is for me. Unfortunately, I have noticed in recent years that more and more people seem to have forgotten (or maybe never learned) what to do with the palms. So either they don't take them at all or, even more revealingly, they return them at the end of the Mass! In the past, the priest used to pray that wherever the blessed palms might be brought those there might be blessed and protected from dangers. Obviously that prayer needs to be retrieved and its message better publicized!

Anyway, back to the Triduum. Apart form Easter Sunday morning itself, my personal favorite has always been Holy Thursday - and not just because I happen to have been born on a Holy Thursday! This year, after the Holy Thursday celebration, a friend texted me to say "that was truly fantastic." For me that has always been the case, year after year, which is why it remains my favorite. it makes me more appreciate the traditional wisdom of the Church which expected Bishops to celebrate pontifically those two services - Holy Thursday and Easter morning, while letting them get away with mere "pontifical assistance" (as it used to be called ) on Friday and Saturday.

Apart from the recent (1955) addition of the Footwashing (for centuries performed by Bishops and Abbots and Kings and Queens, but always outside of Mass), the Holy Thursday service is simple and straightforward. And yet it in effect celebrates the whole story, proclaiming the lord's death until he comes. We keep the anniversary of Christ's institution of the Eucharist and the priesthood by doing what he did. And, again apart from the Footwashing, the only actual addition to the Mass is the solemn Procession at the end with the Hosts reserved for Communion the following day. This most beloved part of the Holy Thursday ritual highlights the connection with Friday's service and so is not permitted in churches where Friday's service will not be celebrated.

Although liturgically the two services, Thursday's Mass of the Lord's Supper and Friday's Celebration of the Lord's Passion, bookend the first day of the Triduum, they could hardly be more different.  The Milanese Ambrosian Rite still preserves the custom of a Liturgy of the "Presanctified" instead of Mass on certain Lenten weekdays, and the Eastern churches even more so. But this is the only remnant of that ancient tradition in the Roman Rite. To that ancient ritual (somewhat modified by the post-conciliar reformers' preoccupation with making the Liturgy of the Word look like any other Liturgy of the Word) is added the perennially moving rite of the Veneration of the Cross, which often makes the service very long, but which seems worth it to most people who appear to value highly the opportunity to venerate the Cross personally. (In the heyday of liturgical minimalism in which I grew up, individual veneration was postponed until after the service and then done speedily with multiple crosses - a clear case in which what we do now is an enormous improvement!)

The 1955 reform radically simplified the Communion part of the service and extended Communion to all, after centuries in which only the celebrant communicated. This results in the inefficiency of having people come up in procession twice in quick succession. But again no one seems to mind. I have heard some voices actually argue against the Communion Rite, either because they think the Adoration of the Cross would make for a more distinctive ending or because they don't like the now restored ancient custom of Good Friday Communion for all. I could live content with Good Friday ending with the Veneration of the cross without Communion. But that would mean either returning to the previous practice of only the priest communicating (traditional and venerable, but incomprehensible to most modern sensibilities) or eliminating any Communion Rite at all, which would mean abolishing the best loved feature of Holy Thursday, the procession at the end of Mass. For the sake of Holy Thursday, therefore, I'm all for keeping Good Friday as it is!

Someone once somewhat insensitively called the Good Friday service a "train wreck," which it assuredly is not, but perhaps such a sentiment might be somewhat more applicable to what is obviously - and for good reason - the least popular (i.e. least well attended) of the Triduum services, the Easter Vigil. I have written here before about how the Vigil seemed to me to make more sense when it still maintained the form of a Vigil, ending with the first Mass of Easter - rather than the radically reformed version we now have, in which the Vigil is really just a very long anticipated Saturday night Sunday Mass.  That speaks to the logic of the service (as well as to its historical and traditional forms) but does not really address its extreme length, the factor that (especially at such a late hour) works against it ever becoming seriously popular.

I have always loved the Exultet, and I always look forward to the ringing of the bells at the Gloria, and I would add as a third favorite the triple Easter Alleluia. But to experience those beautiful moments, one must endure the tedium of the most boringly arranged Liturgy of the Word. While some of the readings (e.g., from Genesis and Exodus) are interesting in themselves, they are saddled with lengthy responsorial psalms. Since I have always thought of the responsorial psalm as the most boring part of the Liturgy of the Word anytime, the prospect of sitting through several of them in a row does not attract. I say this despite fully understanding that the readings - traditionally in the Roman Rite 12 "prophecies" - are the historic heart of the Vigil and so in a sense what make a vigil actually a vigil!

Undoubtedly for those being baptized or received into the Church at the Easter Vigil, the event is justifiably so special for them that the structural problems of the Vigil do not matter. But for almost everyone else, the Easter Vigil remains sufficiently unattractive to tempt very few ever to attend.

Still it is the great night of the resurrection, and Easter is the great day of days. Taken as a whole, with all their practical problems, the Triduum and Holy Week are always wonderful to experience.
Posted by City Father