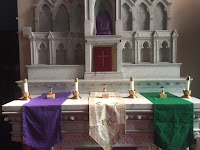 This day we call Holy Thursday uniquely straddles the border between Lent and Easter. In the ancient Church, the Pope celebrated an end-of-Lent morning Mass at which those who had done public penance during Lent were reconciled.  The elaborate ritual for the Reconciliation of Public Penitents could still be found in our liturgical books up until the 1960s, even though by then it hadn’t been used for over 1000 years.

A second, centuries-old Holy Thursday tradition is the Bishop’s blessing of the holy oils, which will be used throughout the coming year in the sacraments of baptism, confirmation, holy orders, and anointing of the sick. Finally, with the setting of the sun, the Church crosses the threshold from Lent into Easter with this evening’s remembrance of the Last Supper, at which the various themes so long connected with this day all come together in the Eucharist. For tonight we don’t just remember the Last Supper of Jesus with his disciples, as some interesting thing that happened a long time ago. Rather we celebrate how Jesus’ Last Supper continues in the Church as the Lord’s Supper.

But first the oils! I mentioned that the holy oils the bishop blessed this week will be used throughout the year in the sacraments of baptism, confirmation, holy orders, and anointing of the sick. In addition, that the same oil is also used in the consecration of altars and churches. So the sacred chrism consecrated by the Bishop this week will be the same chrism used by him to consecrate the altar and walls of our beautiful new cathedral less than 11 months from now. By coincidence, this happens to be Immaculate Conception’s week to host the Cathedral’s Dedication Stone, which as you can see is on display in front of the altar where the newly blessed holy oils have been placed (photo). The two – the oils and the stone - really do belong together, for together they remind us of our unity as one Church, as a church community united around our Bishop as successor of the Apostles – the same Apostles Jesus instructed in such detail at that Last Supper which we remember tonight. None of them, of course, as they sat down to supper that night, knew that - by the time Passover began, 24 hours later - Jesus would be dead and buried, and that they would all be in hiding.


But we know. And so, with this festive celebration this evening, the Church begins the first of three dramatic days – the first devoted to Christ crucified, the second to Christ buried, and the third to Christ risen. We will end this first day, some 24 hours from now, at the foot of the cross, but we begin by remembering the most memorable meal in all of human history – remembering and celebrating how Jesus’ Last Supper continues as a perpetual institution in the Church as the Lord’s Supper.

Remembering is indeed what this night is all about. The church’s official Ceremonial instructs us to remember “how the Lord Jesus, loving those who were his own in the world even to the end, offered his body and blood to the Father under the appearances of bread and wine, gave them to the apostles to eat and drink, then enjoined the apostles and their successors in the priesthood to offer them in turn” [Ceremonial of Bishops, 297].

The Church celebrates this sacrament daily, and she commands us to come together at least weekly to remember Jesus’ words and actions and to celebrate their continued, ongoing power to make us who we are and transform us into who we hope to become.

Our life together as Christ’s Church, centered on the sacraments is a great inheritance – received from the apostles and passed on through countless generations of people like us. Whether in the splendor of a papal basilica or the simplicity of a missionary outpost, whether with the Bishop in his cathedral or with friends and neighbors in our local parish church, this same Lord’s Supper has been celebrated and treasured generation after generation as our most precious inheritance – an inheritance which it is now our precious privilege to share with the world today and to pass on to tomorrow’s generations to come.

But this Lord’s Supper also a challenge. The four short verses we just heard from Paul’s 1st letter to the Corinthians (the earliest written account of the Last Supper) are part of a longer text (which used to be read in its entirety at this Mass), which highlights the Corinthians’ conflicts, dissensions, and factions – in other words, their resistance to being changed by the very Eucharist that they were privileged to experience together.


We hear a lot in the news about the seriously vexing problems of increasing inequality and of the many divisions in our society, and we can certainly see and experience the consequences of such divisions all around us. Well, back then, among those Corinthian Christians to whom Saint Paul was writing, all was not well either, even among themselves. It seems that the values of Roman secular society, with its social and class distinctions, its divisions, and its inequalities, were making themselves felt even within the Church community, to the point that even the celebration of the Lord’s Supper seemed to mirror those distinctions, divisions, and inequalities. Whatever was going on, Paul’s point that he was making to the Corinthian Christians was that they were missing the very meaning of the Lord’s Supper and the opportunity it offered for them to be transformed by it.
Perhaps the Corinthians couldn’t quite help bringing the world with them to Mass, any more than we can. And that is why being here together is so important, why what happens here at this altar is so important, enabling us to leave here somehow different from how we came, enabling us to take something new with us when we go back out into the world, something very different from the same old stuff which we are so easily tempted to bring in with us from the world.
In one of his early 5th-century Easter sermons, Saint Augustine invited his hearers to see themselves in the Eucharistic bread and wine. So just as you can see that what has been made is one, he told them, mind you are one yourselves too in the same way, by loving each other, by holding one and the same faith, one and the same hope, an undivided charity. … You are this together with us; we all take this together, all drink together, because we all live together. [Sermon 229]
So it is no accident that we consecrate church buildings and set them apart by their architecture and external appearance from the secular world and its transitory activities, as earlier generations of Knoxville Catholics did here at Immaculate conception 130 years ago and as our entire diocese is now doing with our new cathedral.
For the Eucharist is not some meal just like any other, and the community it creates is not some social institution like any other. What happens here in this sacred place is meant to make us, in an absolutely important way, different from who we would otherwise have been, different from the world we came here from and to which we must for the time being return.
The Gospel account we just heard tells us that the Devil had already induced Judas to hand Jesus over. In the next scene that follows tonight’s account, after Judas had received a piece of bread from Jesus, Satan entered him, and Judas went out into the night. He left Jesus and the other disciples behind. He left behind the Church community that could have been his, in order to commit himself instead to Satan’s cause.
What was the piece of bread that Jesus gave Judas? Was it the Eucharist? What a warning is there in that for us?
So too for us tonight – and every time we come together to celebrate the Lord’s Supper - how we depart from Mass may matter much more than how we arrive. What kind of person have I become, and what kind of community have we become, because of what we have experienced and shared together in this very special and sacred place, this consecrated place set apart from the ordinary, secular world? What will we take with us from this sacred, consecrated place to remake ourselves and our world? What will we take with us from this sacred, consecrated place to proclaim to one another and to all the world the death of the Lord until he comes?
Homily for the Mass of the Lord’s Supper, Immaculate Conception Church, Knoxville, TN, Holy Thursday, April 13, 2017.
Posted by City Father