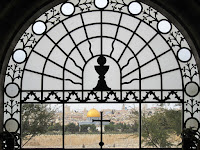 In April 1874, Father Isaac Hecker, the founder of the Paulist Fathers, traveled from Cairo to Jerusalem. He had gone abroad, to Europe and the Middle East, in search of restored health, a goal which eluded him for more or less the rest of his life. Like so many pilgrims, both before him and since, however, he certainly experienced the special spiritual intensity that can accompany a pilgrim’s sojourn in the Holy Land.

Reflecting on his experience, he wrote: In reciting the Gloria and the Credo, after having been in the localities where the great mysteries which they express took place, one is impressed in a wonderful manner with their actuality. The truths of our holy faith seem to saturate one’s blood, enter into one’s flesh, and penetrate even to the marrow of one’s bones.

Although, unlike Hecker, I was not yet a priest when I visited those holy places in 1993, I could certainly experience some of what he seems to have felt, from just being in those special places. For centuries, pilgrims have eagerly sought that sense of direct connection. The presence of Stations of the Cross in every Latin Catholic church testifies to the desire to bring that connection home, so to speak.

Holy Week is a profound sacramental. It is so much more than a prolonged passion play, some dramatic re-enactment of long-ago events. Even so, not unlike the devotion of the Way of the Cross, historically Holy Week evolved in part as a stretching out of the Easter mystery over time to experience through celebrating at special times what pilgrims in Israel experience through being present at special places.

And so it is that two millennia later we still re-enact Christ’s entry into Jerusalem on Palm Sunday. We still commemorate the institution of the Lord’s Supper on the anniversary of the Last Supper, even washing feet in imitation of that unique occasion. We venerate the unveiled Cross on Good Friday in imitation of pilgrims’ veneration of the exposed relic of the True Cross in Constantine’s Basilica. And we imitate the night of the Exodus by keeping vigil until we arrive at the empty tomb.

Secular time continues to follow its commercial rhythm, regardless of Holy Week's sacramental time. It seems that the rites and ceremonies of Holy Week can barely compete for attention against the background of so much activity and business. Precisely by using time to take us, as it were, to another place, however, Holy Week offers those who enter its unique rhythm an unparalleled alternative to our fragmented modern existence, wherever we are.

(Photo: View of the Holy City from the Church of Dominus Flevit).
Posted by City Father