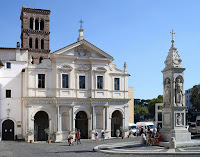 At 5:00 p.m. Rome time tomorrow, Pope Francis will honor the “new martyrs of the 20th and 21st centuries” during a liturgy of the word at the community of Sant’ Egidio’s 10th-century Church of St Bartholomew on Rome’s Tiber Island (la Basilica di San Bartolomeo all'Isola). Founded by Emperor Otto III to house the relics of St. Bartholomew the Apostle, the basilica (photo) is on the site of a former temple of Aesculapius. Since the Great Jubilee of 2000, the basilica has also served as a shrine to the many “new martyrs" of the 20th and 21st centuries.

According to a statement released by the Sant' Egidio Community: "The Pope's prayer in a place, which - since the Jubilee of 2000, at John Paul II's behest - contains the memoirs of contemporary martyrs, takes on a very special significance in these times marked by the suffering of so many Christians in the world and by the light of Easter."

Among the “new martyrs” memorialized on Tiber Island is the French priest, Father Jacques Hamel, who was murdered by two Muslims claiming allegiance to the Islamic State while he was celebrating Mass in his Normandy church on July 26 last year.  At last week’s Chrism Mass the Archbishop of Rouen announced the opening of the Cause for Father Hamel’s Canonization. (Normally there is a five-year waiting period after someone has died before an official Cause can begin, but Pope Francis has given a dispensation from this norm in Father Hamel’s case.) After Father Hamel’s murder last year, Pope Francis identified him as part of a “chain of martyrs … Christians, who suffer today — be it in prison, in death or by torture — for not denying Jesus Christ.”

Last September, the Archbishop of Rouen added Father Hamel's Breviary to the collection of "relics" of these modern "martyrs" that are kept in the Tiber Island basilica. Some of the other mementos of these modern "martyrs" include a missal used by Blessed Oscar Romero, the rock that killed the Polish priest Blessed Jerzy Popieluszko, and a letter written by one of the Trappist monks of the Our Lady of the Atlas monastery in Algeria (whose story was told in the 2010 movie Of Gods and Men).

Of course, the 20th and 21st centuries have seen many more who have died for the Catholic faith in addition to those famous figures we have all heard of.