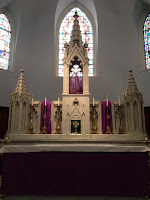 The altar crucifixes, the statues, and other sacred images are all covered in purple today. Until relatively recently, this 5th Sunday of Lent was called “Passion Sunday.” With just 2 weeks to go till Easter, today marks the beginning of Lent’s final phase, as the Church focuses our attention more and more on the final events of Jesus’ earthly life – and why those events matter for us today.

The gospel we just heard recounts the last miracle of Jesus’ public life – miracles which John’s Gospel calls “signs” because they function to reveal Jesus and invite us to respond to him with faith. The raising of Lazarus is the last and greatest of these “signs.” But it also led the authorities to seek Jesus’ death. So life and death are mixed together, as the same event that suggests the new life Jesus makes possible for us also results (on the part of his enemies) in a decision for death. The apostle Thomas’s somewhat surprising exclamation, “Let us also go to die with him,” is actually addressed to us, as the Church invites us to accompany Jesus in his final journey.

Meanwhile, what starts out as a genuinely touching and tender story about the human friendship between Jesus and Lazarus - and the dramatic extension of Lazarus’ earthly lifespan - becomes a story about our relationship now with the Risen Christ and his offer to us of a resurrection similar to his own.

The friendship shared by Jesus and Lazarus extended also to his sisters, Martha and Mary, who first sent him the news of their brother’s serious sickness. Strangely, however, he initially seemed to ignore their message, letting Lazarus die and be buried, thus setting the stage for his greatest miracle, but before that for an important conversation with Martha, which for so many centuries has been the standard gospel reading at Catholic funerals.

No doubt we all have had the experience at a funeral or a wake of wanting to say something significant but ultimately having nothing more than the tried and true common expressions of conventional consolation, to answer the sad and anguished feelings that inevitably arise out of broken hearts. Perhaps that was how Jesus’ initial response sounded to Martha.

Listening in on their conversation today, we hear Jesus’ one-sentence answer to Martha, Your brother will rise, (and her rather matter-of-fact response) rather matter-of-factly ourselves. Perhaps we forget that most people in the ancient world, including virtually all non-Jews, were unanimous in their agreement that, whatever else may happen to people when they die, dead people definitely do not rise back to life from the dead. Many modern people today share that view. Thirty-something years ago, when (as a seminarian studying in Washington, DC) I was teaching 1st Communion class at a somewhat upscale parish near the US Capitol, one second-grader totally dismissed what I was trying to teach about the resurrection. “Once you’re dead, you’re dead,” she said. “That’s all there is to it,” she insisted
.
Among 1st-century Jews, however, at least one group – the Pharisees (whose beliefs both Martha and Jesus apparently shared) – held the distinctly contrarian view that, whatever else may happen to people when they die, some sort of general resurrection of the dead would follow - on the last day.

As he did in his earlier conversations with the Samaritan woman and the man born blind, Jesus uses the conversation to reveal something important about himself. Jesus’ surprising answer to Martha, I am the resurrection and the life, was intended to hint ahead to his own unique experience of resurrection – something neither Martha nor anyone else would have understood at the time, since no one was then expecting the Messiah (or, for that matter anyone else) to rise from the dead, all by himself, ahead of everyone else.

We, however, can follow the story backwards, so to speak. We start from the fundamental fact that Jesus has risen from the dead, and then we understand his death - and his whole life - in the light of that.

Lazarus was brought back from the tomb to resume his ordinary life (and then eventually to die again).  Unlike Lazarus, however, Jesus would rise out of his tomb in order to live forever. Bystanders had to take away the stone for Lazarus to be able to come out, and Lazarus himself emerged bound hand and foot. In Jesus’ case, however, no one would either have to help him to come out or have to untie him. The resurrected life of the Risen Christ is something altogether new and different. It signals death’s decisive defeat.

Hence the threat that this subversive belief in the resurrection posed – and still poses – to those who see only the familiar world we now know. John’s Gospel goes on to tell how, as a result of this event, the political leadership decided to kill Jesus - and to eliminate the evidence by killing Lazarus too.

The raising of Lazarus looks ahead to the resurrection of Jesus, which will finally fulfill God’s promise to Ezekiel, which we heard earlier: I will open your graves and have you rise from them. I will put my spirit in you that you may live. I have promised, and I will do it, says the Lord.

Martha’s invitation to Mary, The teacher is here and is asking for you, is addressed to all of us, who are in turn invited to address it to one another - and to a world which seems so lacking in hope and so desperately needs to hear it, but which sometimes seems increasingly at a loss about what Christians actually believe about human death and resurrection. This is increasingly evident, for example, in contemporary trends in funeral customs.

After experiencing what Jesus had done for Lazarus, many believed in him, but others went to report him to his enemies. Jesus’ own resurrection, to which the experience of Lazarus looks forward, likewise challenges each of us to respond - one way or the other.