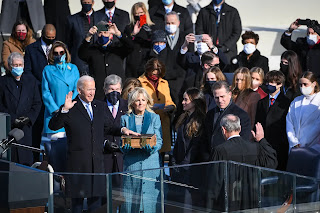 "Our long national nightmare is over," was the most remembered opening line from President Gerald Ford's remarks after taking the Oath of Office following Richard Nixon's resignation  in August 1974.  If Watergate was actually our long national nightmare," what words can we use to describe the far greater horror of the past four years? Well, we'll leave that question for another day. Today is a day of celebration as a new era begins, even in this period of pandemic and social division and unrest. However dark the sky, the sun is starting to shine through, as for the first time in four years, we heard Hail to the Chief played for someone deserving of it, someone actually chosen by the people of our nation.

In his Inaugural Address, President Biden called on us as Americans to "end this uncivil war that pits red against blue. Rural vs. urban. Conservative vs. liberal. We can do this, if we open our souls instead of hardening our hearts,”  Poignantly, he invited us to join him "in a moment of silent prayer, to remember all those we lost in the pandemic." Looking ahead, he challenged us with what we have yet “to do in this winter of peril and significant possibilities,” and specified some of those challenges, highlighting how national unity is an actual task not just an aspiration.

It was a prayerful inaugural celebration, that began with last evening's prayer service for covid's victims with Cardinal Gregory on the Washington Mall and this morning's Mass at Saint Matthew's Cathedral, attended by many of our national leaders of both parties. It incorporated an unprecedented Inaugural Day visit to the Tomb of the Unknowns with most of his living predecessors (but his immediate predecessor) that in its simple solemnity captured the serious uniqueness of the occasion, before concluding with a festive (if pandemic limited) walk to the White House.

Everything about the day's solemnities signified that the Trump horror show is finally finished and that it is time for the country to come together and get to work. The reckoning with the previous era remains to be completed, but a new era has begun.