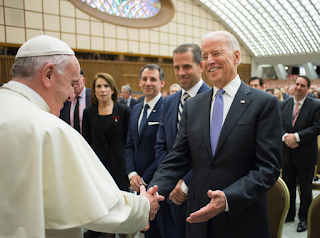 Like our first Catholic president, exactly 60 years ago, our second Catholic president began his inauguration day by attending Mass. The homilist, Fr. Kevin O'Brien, SJ, the President of Santa Clara University, acknowledged the historical parallel and acknowledged its appropriateness. "As you have done so often in your public and private life and during the campaign, Joe and Jill, you ground this day in your faith and in the familiar readings and prayers of these sacred rituals."

Pope Francis waited until Biden's actual oath-taking at noon to send his greeting:

On the occasion of your inauguration as the forty-sixth President of the United States of America, I extend cordial good wishes and the assurance of my prayers that Almighty God will grant you wisdom and strength in the exercise of your high office. Under your leadership, may the American people continue to draw strength from the lofty political, ethical and religious values that have inspired the nation since its founding. At a time when the grave crises facing our human family call for farsighted and united responses, I pray that your decisions will be guided by a concern for building a society marked by authentic justice and freedom, together with unfailing respect for the rights and dignity of every person, especially the poor, the vulnerable and those who have no voice. I likewise ask God, the source of all wisdom and truth, to guide your efforts to foster understanding, reconciliation and peace within the United States and among the nations of the world in order to advance the universal common good. With these sentiments, I willingly invoke upon you and your family and the beloved American people an abundance of blessings.

The Holy Father's message highlighted the hoped-for coherence between Biden's political priorities and those broadly associated with the Church's traditional teaching about political principles rooted in social solidarity. (His warm words contrasted favorably with the cold and confrontational tone of the statement issued by the President of the U.S. Conference of Catholic Bishops.) The Pope's prayer for the divine gifts of wisdom and strength will surely be much needed as President Biden struggles to heal this wounded nation and so help us all move past our increasingly severe civil and religious divisions.

(Photo: The now familiar photo of Pope Francis greeting then Vice President Biden at the Vatican in 2016.)