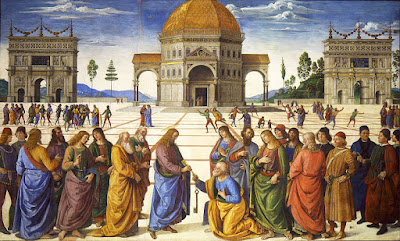 Some Thoughts on the 2nd Sunday in Ordinary Time, January 17, 2021.
We are but a little more than two weeks into a new year. In three days, we will inaugurate our new president, the second Catholic president in our country's history. It is a season of new beginnings on so many levels, coming at a time when we are all hoping for a new and better future. And, in this season of new beginnings, the Church today also recalls the organizational beginning of Jesus’ public mission. Indeed, today’s Old Testament reading [1 Samuel 3:3b-10, 19] and Gospel [John 1:35-42] must surely be a Religious Vocation Director’s dream texts!

In church language, we usually use the word “vocation” in two complementary senses – first, for God's general call to all to be converted and become a disciple, and, secondly, for the particular call to some of those disciples to undertake lives of full-time ministry in the Church. In the Gospel, the two vocations came together for Andrew and his brother Simon Peter. In Peter’s case, one could say he went from fisherman to disciple, to apostle, to Pope – all in one encounter!

Samuel’s case may have been a bit more typical. He was just a boy, but he was already being brought up to be devoted to the Lord, which is surely how many religious vocations begin, are nurtured, and flourish.  Then, gradually, Samuel heard the Lord’s voice calling him to a more special mission.

Listening to Samuel’s story, I am inevitably reminded of our Paulist Fathers' Founder, Servant of God Isaac Hecker. I particularly recall Hecker’s account of his own boyhood, as he described it in statements made towards the end of his life: Often in my boyhood, when lying at night on the shavings before the oven in the bake house, I would start up, roused in spite of myself, by some great thought … What does God desire from me? … What is it He has sent me into the world to do? These were the ceaseless questions of my heart, that rested, meanwhile, in an unshaken confidence that time would bring the answer.

For all the drama we may be inclined to associate with God’s call, Hecker’s account illustrates how God’s call comes typically in the midst of our ordinary, everyday activities. Two things clearly stand out in all these accounts. The first is that the intended recipient of God’s call must be receptive, and let the Lord take the initiative. In short, he or she needs to LISTEN. In this “information age” of toxic social media, we have all become accustomed to being inundated by all sorts information, much of which we have no real need for, and some of which (as current events keep reminding us may be false and poisonous).

So it is becoming increasingly hard for many of us even to imagine having a reason to listen to anything new or different from anything that conforms to that we have already heard before, what we already think we know.. But God doesn’t impart pre-packaged, pre-digested information. He calls us personally into relationship with him, and it is to HIM that we need to listen.

The second thing that seems to stand out in the biblical accounts is the important part played by the believing community as a whole. As with Jesus’ invitation to his 1st disciples in the Gospel account we just heard, God’s call is first and foremost a challenge to Come, and see. Closely connected with the part played by the believing community as a whole is the guiding role played by particular people in that community – people like Eli in the case of Samuel, John the Baptist in the case of Andrew, and Andrew in the case of Simon Peter. To that illustrious list, many others might be added - Ambrose in the case of Augustine in the 4th century, and the famous American Catholic convert, Orestes Brownson, in the case of Isaac Hecker in the 19th century.  Eli, John the Baptist, Andrew, Ambrose, and Orestes Brownson all functioned as intermediaries facilitating the special vocations of others.

There have been occasions in history when the community assumed what, by today’s standards, might seem an excessively forceful role in fostering vocations in the Church. Augustine's mentor, Ambrose was famously chosen Bishop of Milan by popular outcry in 374. Then, in the year 391, Augustine, already 36 years old, but baptized only 4 years, visited the North African town of Hippo, Valerius, the Bishop there, knew of Augustine’s reputation as a talented orator and took advantage of the opportunity to announce that, because of his age, he needed the assistance of a younger priest, who was a good speaker. The congregation took the hint; grabbed hold of Augustine; and refused to release him until, weeping, he agreed to be ordained!

That might be a bit over the top by today’s standards and our more modern bureaucratic approach to vocations. All these cases do remind us, however, that one’s sense of one’s vocation is hardly likely to arise in isolation and can even less likely be fostered and flourish in isolation. In our common life together as Christ’s Church – just as in our common civic life as citizens - we all need people like Eli, John the Baptist, Andrew, Ambrose, and Orestes Brownson to challenge us recognize what we are being called upon to do. And we in turn need to be ready and willing to play that role for one another!