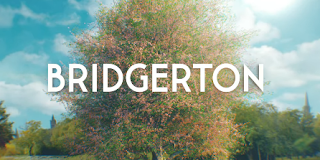 Whiling away the hours in New York quarantine, I recently "binge-watched" all eight episodes of season one of Bridgerton, the new Netflix period-piece, costume drama, set in the marriage competition of the social season of 1813 Regency London, that premiered on Christmas Day. The show is based on the series of novels that chronicle that lives and romances of the eight Bridgerton children, in the Regency London's "ton," its aristocratic, supposedly well-mannered, high-society. Season one centers on Daphne, the eldest daughter of the large Bridgerton family, who has just been presented at Court, and how her debutante season plays out for her and her eventual marriage to the super-eligible but emotionally damaged Duke of Hastings (played perfectly by Regé-Jean Page). It also highlights the brutal competitiveness of that society through the contrast with the comparably privileged but less lucky Featherington family and the influence of "Lady Whistledown," an anonymous gossip columnist whose daily newsletter is read by everyone in society, including Queen Charlotte herself. (Historically, prior to his illness King George III and Queen Charlotte themselves  are reported to have had a rather happy  marriage based on genuine friendship, a reality alluded to in the series.)

Bridgerton portrays a seemingly privileged, comfortable world of people who don't have to work for a living, but whose lives are almost completely controlled by a society largely focused on shallow physical appearances and a relentless preoccupation with who is up and who is down. It is Jane Austen-like in its portrayal of the social mores of the era as they affected men, women, family, marriage, and social status. But, having been written now rather than then, it has a somewhat stronger, harsher edge than Jane Austen's novels and includes very un-Austen-like love scenes. (Some viewers may think the love scenes too much, but they are an unavoidable component of the plot-line.)

The series virtually screams the women characters' complaints about the limitations the social system of aristocratic marriage (and society as a whole and in particular the men in their lives) imposed on them. But, in fact, the men too are trapped in the system and its demands and try to rebel in various ways, as illustrated by the ups and downs experienced in particular by Daphne's three older brothers as well as the Duke of Hastings himself.

Underneath the beautiful costumes and period-piece glamor, Bridgerton raises serious, perennial issues, not just about the status of women but about the nature of human fulfillment and its relationship to family duty. Its characters probe the meaning of marriage as a social institution and what love and friendship have to do with it. (The Duke's description to Queen Charlotte of the friendship between him and Miss Bridgerton in episode 5 is as good as it gets.) Refreshingly the series also portrays family life in an attractively positive way, how a loving family with lots of children is really something desirable, something that can actually make people happy, both men and women.