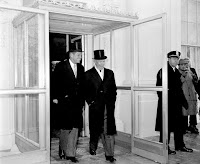 "There is no ceremony more splendid than the inauguration of an American President," proudly proclaimed Theodore H. White in The Making of the President 1960, his historic and now classic celebration of the American electoral process as it was in the mid-20th century. "Inauguration is a ceremony of state, of the visible majesty of power," he continued. "And though the powers of the office are unique, even more spectacular and novel in the sight of history is the method of transfer of those powers—the free choice by a free people, one by one, in secrecy, of a single national leader."

The first Inauguration to celebrate the free and peaceful transfer of power from one elected president to another was that of John Adams, who succeeded George Washington on March 4, 1797. Even more consequential, however, was that of Adams' successor, Thomas Jefferson, on March 4, 1801, the first time a president of one political party, defeated for reelection by the leader of the other political party, surrendered power peacefully. In 1801, Adams simply left the White House early in the morning on March 4 and, as an ordinary citizen, boarded the stage coach for the long trip back home to Massachusetts. Since then, just as the entire inaugural ceremony has become much more elaborate, the peaceful transfer of power from president to president and party to party has been ritually symbolized in a special way by the custom of the president-elect calling on the outgoing president at the White House and the two of them then riding together to the Capitol. The last president to refuse to participate in this ritual was the first president to have been impeached (but not convicted) Andrew Johnson, who held his last Cabinet meeting at the White House as Ulysses S. Grant was being inaugurated. (Because of his declining health after his stroke, outgoing President Woodrow Wilson skipped the ceremony itself, but he did ride together with President-Elect Harding from the White House to the Capitol.) As symbols go, this has become an important and much cherished one. Seeing the two ride together and the outgoing president being properly saluted with Hail to the Chief, followed by the new president taking his oath and then being saluted in the same way, confirms our comfortable conviction (perhaps conveniently too comfortable conviction) about the nobility and permanence of our American constitutional order, which we have until now largely taken for granted.

Until this year! It should, of course, have come as no surprise to anyone that Donald Trump, having consistently disgraced the high office of president for four terrifying years and having sought to subvert the people's will as expressed in the recent presidential election, would not be present to play his prescribed part in this ritual celebration of constitutionalism and democracy. A reflection of our tragic time and the terrible calamities which have befallen our country, tomorrow's Inauguration events will be unlike any other we have recently experienced.

For one thing, unlike the incoming president, who denounced riots and rioting last year, the outgoing president stands accused of having incited the unprecedented riot at the U.S. Capitol that was intended to disrupt the counting of the electoral votes on January 6 - a riot that resulted in the deaths of five people and endangered many others. The result is that this will be the first ever Inaugural which coincides with the impeachment of the outgoing president. Donald Trump has thus managed to become the first president to be impeached twice, which means half of the presidential impeachments in our national history will be forever associated with his name! Trump's second impeachment was also the most "bipartisan" presidential impeachment in history, inasmuch as 10 Republican House members broke party ranks to vote for the president's impeachment.

Given the calamitous events of two weeks ago, this is also perhaps the most high-security inauguration ever, with Washington transformed into a fortress city Add to that the omnipresent consequences of the covid pandemic, and this traditionally public event will likely have the least  participation on the part of the ordinary public of any modern inauguration. This is the way we live now. Instead of the national unity and sense of common purpose that we expect at an Inauguration, we have fearful finger-pointing among members of Congress, mirroring the conflicts that continue to tear America apart.

(Photo: President Eisenhower and President-Elect Kennedy leave the White House for the capitol, January 20, 1961, the first such transfer from one president and party to another that I can remember.)