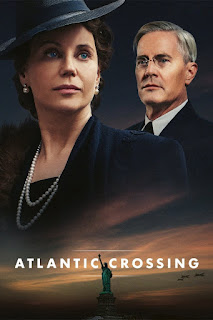 Crown Princess Martha of Norway (1901-1954) was a Swedish princess who married Norway's Crown Prince Olav (later King Olav V) in 1929 and so became the mother of Norway's current King Harald V. In World War II, when the Germans invaded Norway, she and her three children fled across the Swedish border, while the King and Crown Prince continued the struggle, eventually settling with the Norwegian Government-in-Exile in the U.K. for the duration of the war. Martha's presence in her homeland was seen as problematic, possibly putting Sweden's (somewhat pro-German) neutrality in jeopardy. Fortunately, the Crown Prince and Princess had made an official visit to the U.S. the previous year and had met President Roosevelt, who now extended his personal invitation to her to take refuge in the U.S., where she and her children initially stayed with the President in the White House, while promoting Norwegian interests in the war. (I recall the 1983 TV miniseries Winds of War, based on Harman Wouk's 1971 book by that name, in which Princess Martha is one of the guests at a White House dinner attended by the series' main protagonist "Pug" Henry.) In 1941, the Princess accompanied FDR for the famous Atlantic Charter meeting with Winston Churchill. Roosevelt's son James said, "There was no question that Martha was an important figure in Father's life during the war." This was the historical relationship which is the basis for the new 8-part  PBS Masterpiece series Atlantic Crossing, the first episode of which was shown on Easter Sunday, but which can be watched in its entirety on PBS Passport. Here, however, I will confine my comments only to episode one.
After a brief prelude recalling Prince Olav and Princess Martha's happy marriage and their pre-war visit with FDR in 1939, the scene shifts to a year later. Olav and Martha's idyllic family life with their three young children and elderly widowed King Haakon is suddenly disrupted by the German attack on April 9, 1940. We get an insight into the confusing and uncertain political situation in Scandinavia as Denmark quickly falls to the invaders, while Norway's King and Government flee into the snowy north in what we know will be a fruitless exercise in resistance. Meanwhile we witness the sheer terror the German attack causes among the Norwegians - from hapless civilians on a ship to royal retainers separated from their children to the royal family themselves. Olav, of course, accompanies the King and the government officials in what appears to be pointless, obviously ill-planned wandering in the snowy north, just trying to avoid German warplanes. Meanwhile, Martha and the terrified children get in another car and flee toward the Swedish border, where she is denied entry, despite having been born a Princess of Sweden. Up until this point, Martha has appeared almost a passive witness to the complete collapse of her happy little world. Suddenly, she springs into action and tells her driver to ram through the barrier blocking the border. The episode ends with Haakon and Olav somewhere in the snow, while Martha and her children await an uncertain future in a Swedish hotel. Of course, we know, they will all make it out safely. So that somewhat standard ending of the episode on a suspenseful note serves no real dramatic purpose.
Despite the passing of the "greatest generation," World War II continues to fascinate. There seems to be an increased interest in portraying the complexities and ambiguities that upset and disrupted actual (often otherwise ordinary) lives. And that seems to be the direction this is going, highlighting the more "ordinary" aspects of the participants' lives. War, while not the equalizer it is sometimes supposed to be, proves universal in its unpredictable and disruptive impacts.