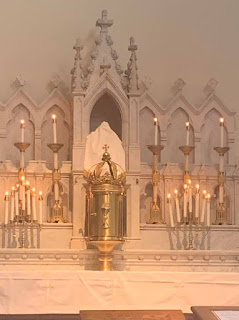 "On this day the sacrifice of the sacred Body and Blood of the Lord was initiated as a celebration by the Lord himself. On this day the holy chrism is consecrated throughout the world; on this day too pardon is granted to penitents, those at enmity are reconciled, those who are aggrieved are pacified" (Letter of Pope Sylvester, 4th century).

The Rite of Reconciling Penitents remained in the Roman Pontifical until the 20th century, but the reality had long since lapsed centuries earlier with the decline of public penance and the rise of private confession. In The Liturgical Year, volume 6, Gueranger gave a detailed description of the ancient ritual and of the Papal Blessing that used to be given from the inner loggia of Saint Peter's on this day.

But if the Reconciliation of Penitents long ago passed into. history the other two ancient aspects of Holy Thursday have successfully survived into the present. While a separate Chrism Mass had long since disappeared, over the centuries the blessing of the Oil of the Sick, the Oil of Catechumens, and the Sacred Chrism had become an integral part of the Pontifical Mass of the Lord's Supper celebrated at the Cathedral on Holy Thursday morning. Pope Pius XII's Holy Week reform in 1955 recreated the ancient Chrism Mass and assigned it to Holy Thursday morning, while moving the traditional Mass of the Lord's Supper from morning to early evening both in the cathedral and in parish churches. The Chrism Mass was radically revised as part of Paul VI's post-conciliar liturgical reform and has since acquired an unprecedented degree of popularity, particularly among clergy.

For the most part, "private" Masses have been prohibited on this day, with all priests encouraged to participate (and, since Vatican II, to concelebrate) at the one solemn community Mass., which since 1955 has been celebrated in the evening. Generally this has been my favorite of the Holy Week services, and I will especially miss celebrating it this year.

Other than the unfortunate transfer of the reading from Exodus 12 from Good Friday to Thursday, the other significant alteration in the post-conciliar Mass of the Lord's Supper was the elimination of verses 20-22 and 27-32 from the traditional reading from 1 Corinthians. The omitted verses frame and contextualize the institution narrative, which is all that now remains of the traditional reading. In recent years, as divisions within both the Church and society have increased (with the latter amplifying and further fueling the former), I have regularly referred to those missing verse in my Holy Thursday homilies to better relate Saint Paul's challenge to his contemporaries to our present situation. So, for example, as I said two Holy Thursdays ago in 2019:

Saint Paul wrote that earliest written account of what happened at that most memorable meal in all of human history not just to tell us a nice story about something that happened a long time ago. It was its present effect that Paul cared most about, and so Paul was in fact complaining, criticizing the Corinthians’ behavior in the present, telling them that they were missing the main point of the Lord’s Supper – receiving the Lord’s Body and Blood in an unworthy way, doing so to their peril. In giving this instruction, Paul wrote, I do not praise you. Your meetings do more harm than good. I hear that when you meet as a church there are divisions among you. When you meet, then, it is not to eat the Lord’s supper.
What an indictment! Saint Paul’s more complete account and discussion about the Last Supper was actually a challenge to the Corinthians - as, through them, it is intended to be a challenge now for us. Saint Paul highlighted the Corinthians’ conflicts, dissensions, and factions – in effect, their unfortunate failure to be changed by the Eucharist. Then as now, in 1st-century Corinth among those to whom St. Paul’s account of the Last Supper was originally addressed, all was not well in the Church. The social, economic, and class distinctions, the inequalities, conflicts, dissensions, and factions, endemic in ordinary Roman society were making themselves felt within the Corinthian Church community, so much so that even the celebration of the Lord’s Supper still seemed to mirror those same social, economic, and class distinctions, inequalities, conflicts, dissensions, and factions.
But those things that matter so much to us in the secular world, Paul insists, should have absolutely no significance whatever within the community of Christ’s body, in which Jesus’ death and resurrection have not only transformed our individual relationships with him but must also change our relationships with one another.
Perhaps the Corinthians couldn’t quite help bringing the world with them - any more than we can, when we come to Mass. That is why what happens here is so important, intended as it is to enable us to leave here different from how we came, to enable us to go beyond our individual self-enclosed limits and so bring something new to the world, something new and different from what we brought here with us from the world. For Jesus’ command to his disciples to do as he did is an invitation to a whole new way of life, made possible for us by what Jesus himself has already done on our behalf.
Back at the Last Supper, in the scene that follows next in John’s Gospel [John 13:27-30], Satan is said to have entered Judas, who, then, after taking a morsel of food from Jesus, left the Supper. How many times has Pope Francis warned us about the danger posed by Satan! The Devil, Pope Francis warned just about a year ago, “poisons us with the venom of hatred, desolation, envy, and vice” [Gaudete et Exsultate].
How well might Judas have benefited, had he heeded such a warning! Instead, we are told, he went out into the night – leaving behind Jesus and his disciples, the community that could have been his, in order to commit himself instead to Satan’s cause.
What was that morsel of food Judas had received from Jesus? Was it the Eucharist? What a warning there is for us in that! What a reminder of Saint Paul’s warning words to the Corinthians that we will be answerable for the body and blood of the Lord for how we celebrate the Lord’s Supper.
So too, for us now, as for Judas at the Lord’s Supper, how we depart from here may matter much more than how we arrive. What have we heard here, and what has happened to us here that has made us different from how we came? What kind of community have we become, thanks to the Lord’s Supper? In the constant competition for our attention and our loyalty, whose cause have we here committed ourselves to? What kind of people are we becoming? What kind of people do we want to become? What will we take with us from here to challenge and change this conflicted and divided world?