Through the Locked Doors 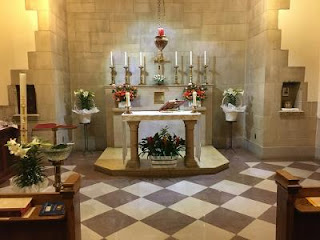 As he does year after year on Low Sunday, the Risen Jesus  passes through the locked doors to say to his disciples and to us, Peace be with you [John 20:19-31]. The disciples' doors were locked out of fear - for good reason. So, more or less, have our doors and lives been locked during this past pandemic year - also out of fear, also for good reason. All the more need, then, for us to hear those reassuring words, Peace be with you.

Meanwhile, today’s 1st reading [Acts 4:32-35] describes what happened after Easter - the life of the first Christian community in Jerusalem. The peace the Risen Lord had given his disciples through the closed doors on Easter Sunday was soon lived outside in the city, which experienced the powerful witness of the apostles to the reality of the resurrection and the dramatic transformation in people’s behavior that resulted - the peace they lived, that then in turn became itself a powerful form of witness.

In a world torn by constant conflict and division, the community of believers strove to be of one heart and mind. In a world divided between rich and poor, between “haves” and “have nots,” between healthy and sick, no one claimed that any of his possessions was his own, but they had everything in common.

The Risen Christ brings the promise of peace and abundant life to all. Just as the disciples, after being initially full of fear, experienced the greatest joy on discovering Jesus to be truly and fully alive, for all of us too the encounter with the Risen Christ is to discover that same peace and abundant life which is the Risen Lord's great gift to us.