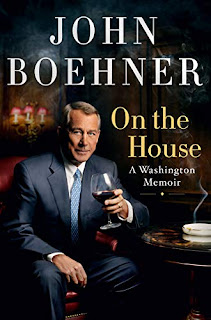 John Boehner begins this stylistically somewhat unique memoir (lots of golf, with not as much but still more than might be expected about going to Mass) by recalling his first meeting with Donald Trump, appropriately enough on a golf course. That was also when he first witnessed Trump's anger, although he "had no idea then what that anger would do to our country." From that initial experience, he moves on to analyzing why "our government isn't working the way it ought to" - in part because some people "come to Washington intent on promoting themselves instead of working together," whom he calls "political terrorists, peddling chaos and crisis so that everyone keeps paying attention to them."

Perhaps, in his defense, Boehner could claim to have spoken up in an indirect way when he threw in the towel in 2015. Now, however, he is speaking up directly.

He portrays his entry into politics as "a Reagan Republican" and his own rapid rise in Republican leadership under Gingrich. Reagan offers him an immediate point of contrast between then and now. "I don’t think Ronald Reagan would recognize the Republican Party today," he claims. "And he sure as hell couldn’t get elected in it. As a matter of fact, Reagan would be the most left-wing candidate in the GOP these days—by a mile."  Gingrich gets him to the Republican takeover of the House and to the politically motivated impeachment of President Clinton in 1998, part of the move to the extremist - and pointless - politics which he now seems to regret.

It is useful to cover old ground like that, to recall that really not so distant past history, because the Republicans' present predicament (and that of the country) is rooted in the Republican party's perversion of our politics in the 1990s with the likes of New Gingrich and even earlier with Reagan and with Nixon's "southern strategy." All of that helped set the confrontational stage on which Boehner's speakership would be played.

Importantly, Boehner recognizes the distinctive dynamic of contemporary American politics which is highly polarized "with plenty of hardliners on both sides" and where the few "swing districts" determine which party controls the house at any time. Paradoxically, this "means whoever is in charge is still going to have to find common ground with the other side to get things done." But that, of course, is increasingly difficult to do. "There are people we are electing who will destroy this country if we aren’t careful. ... I worked with a lot of these people, and fought them plenty. Sometimes they were just annoying, but sometimes they were downright destructive." He makes of point of pre-dating such behavior before to rise of the Tea party - at least back to the Financial Crisis of 2008, his description of his party's poor response to which is one of the more interesting episodes in the book. "Some of the more reasonable members were panicked," Boehner recalls. "But the nuts were even more emboldened." So, when he took the Speaker's gavel midway onto Obama's first term, he became what he calls the "Mayor of Crazytown."

And he was already gone from DC by the time Trump came on the scene!

Regarding January 6, Boehner leaves no doubt that "Trump incited that bloody insurrection for nothing more than selfish reasons," .For the former Speaker, "watching it was scary, and sad. It should have been a wake-up call for a return to Republican sanity."

In the end, Boehner seems happiest recalling one of the few uplifting moments of his Speakership.

"I tried for 20 years to get a pope to come visit the U.S. Congress. No luck with John Paul II, no luck with Benedict XVI. But by the time Francis was elevated, I had friends in the Vatican who could help the process along. In fact, I understand His Holiness was especially favorably disposed to the invitation I sent him after he learned about the work I (and my late pal Teddy Kennedy) had done for kids at Catholic schools in Washington.

"I’d never seen Congress more happy than it was that day. Republicans and Democrats, senators and representatives—everybody was uplifted by Pope Francis’s visit. And it was the presence of the Holy Spirit he brought there that day that gave me the idea to announce my retirement not in the fall as I’d planned but the very next day."