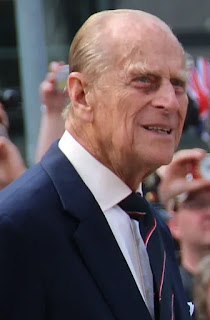 Dead today at the amazing age of 99, the Duke of Edinburgh, the exiled Greek prince who once described himself as “a discredited Balkan prince of no particular merit or distinction”, ended up living a life of great merit and moral distinction as husband of Britain's Queen Elizabeth II. Leaving behind what might have been a promising career in the Royal Navy, he devoted himself totally to the role he had assumed at his marriage, to support his wife in her unique vocation. Dismissed by some as an outsider (despite impeccable royal credentials as a Prince of Greece and Denmark, whose mother was a British princess born at Windsor Castle), he became one of the most energetic members of the Royal Family (including a reported 22,000 solo public engagements), but always understood his role to be one of duty to crown and country, unlike the self-promoting behavior sadly associated with some others who have more recently married into the Royal Family.

Like the Queen herself and in partnership with the Queen, Philip demonstrated the timeless value of a life devoted to an institution and a purpose bigger than oneself. This is a way of life no longer valued much in our contemporary world, and our world is that much poor for it. Together Elizabeth and Philip have for almost 70 years been a powerful counter-cultural force, exemplifying the value of living a life of purpose. The United Kingdom, the Commonwealth, and the wider world have been notably enriched by their great moral example. Institutions (Churches among them) which by their nature might be expected to promote a morally serious way of life but which have fallen prey to therapeutic and other more limiting alternatives, might well look to Philip's example.

On a personal note, 16 years ago I had the great benefit of a sabbatical experience at Saint George's House, Windsor Castle, a program founded in 1966 by the then Dean of Windsor with the Duke of Edinburgh, one of many initiatives that form the legacy of a long and purpose-filled life of service to his country, the Commonwealth, and the world.