After 20 Years of "Forever War" 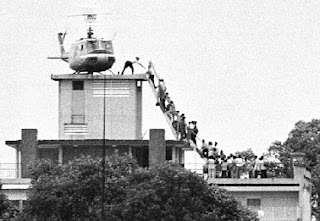 For my generation, the horrifying images of the Fall of Kabul can only recall the comparably horrifying and indelibly imprinted images of the Fall of Saigon in 1975 (photo). There are decided differences, of course, between the two calamities. There had been more of a decent interval between the end of direct American military involvement in South Vietnam and that country's conquest by North Vietnam. Also, in 1975, President Ford was advocating for intervention to salvage the situation, whereas it was Congress (flexing its post-Watergate foreign-policy and war-powers muscles) that prevented him from doing so. In the Afghanistan case, in contrast, it was President Trump who negotiated the withdrawal and President Biden who implemented it. That said, both were wars which the American people had already distanced themselves from. In the case of Vietnam, that was the inevitable consequence of Nixon's having successfully disempowered the anti-war movement by eliminating the draft. A "professional" or "volunteer" (i.e., non-conscript) army makes it easier for governments to engage in military adventurism, while distancing most citizens (if they can still be classified as such) from the costs and consequences of military conflicts. The conspicuous contrast between the commonly shared sacrifice of the "greatest generation" (including on the part of civilians on the home front) and President Bush's post-9/11 injunction to "go shopping" has been a staple component of this conversation.

It is a truism that voters rarely base their vote on foreign policy. Politically, President Ford's defeat in 1976 was not due to his having "lost" Vietnam. Republicans may try to revive their old "Who lost China?" strategy against Biden rand the Democrats regarding Afghanistan, but it is unlikely to matter much - except perhaps among those troubled souls who still believe Biden wasn't lawfully elected anyway. (Of course, the actual withdrawal policy was initiated by President Trump, who had to be dissuaded from inviting the Taliban to Camp David! But why should that stop Republicans from fundraising off this humanitarian tragedy?)

The really important parallel between the way the Vietnam and Afghan wars eventually ended (besides the personal and humanitarian tragedies) is the inevitable consequence for America's falling standing in a world in which U.S. commitments can no longer be trusted by clients and allies. The President may claim "America is back" to his heart's content, but the world now knows otherwise, having seen otherwise. All of which, however, should bring us back to the more basic question of what kinds of commitments ought to be undertaken in the first place, what kinds of political process should be employed to make such commitments, and what kind of society we have to be (or become) in order to follow through on our commitments.

The initial intervention in Afghanistan in the immediate aftermath of 9/11 was justified by the need to eliminate Afghanistan as a 'safe haven" for Al Queda. The problem, however, was that it never became clear how that intervention could end without returning sooner or later to the status quo ante, which, of course, seems to be exactly were we are again now. The imminent 20th anniversary of 9/11 will see the Taliban flag flying triumphantly in Kabul, connoting (if not confirming) the long-term viability of Islamic terrorism in that region and (especially for its own constituency and for recruitment) its long-term superiority to the infidel West.

But what exactly was the alternative? As President Biden said again on Monday, “After 20 years, I’ve learned the hard way that there was never a good time to withdraw US forces." It seems safe to suggest that there will always be a case that can be made for a longer lasting military commitment. After all, the U.S still stations troops in Germany - 76 years after the end of World War II. And, of course the Korean War has never officially ended, and there are still American troops in South Korea. It has been argued that a small force stationed in Kabul and at the nearby Air Base might have propped up the Afghan government and maintained the pre-Taliban status quo - at least as long as the Taliban were willing to go along with that. But why and for how long would they? And then what?

It has often been alleged that the Vietnam War was less about trying definitively to defeat the enemy than it was about postponing the inevitable, because, of course, no one wanted the Red Flag to be raised in Saigon on his watch. Something similar seems to be implicit in the idea that the fourth Afghan War president should have somehow kept this conflict going long enough in order to leave it for his successor. In effect that means that another year or two or ten would have had to become a permanent commitment - a "forever war."

In Vietnam, the North had nationalism on its side. In Afghanistan, the Taliban has religion. The American-trained and American-equipped Afghan army was no match for the smaller force of Taliban true believers - once the guarantee of American support was in fact no longer guaranteed. Like the Iraqis who retreated and collapsed in the conflict with ISIS in 2014, the Afghans - for all their numbers, their training, and their equipment - could not compete with the Taliban, and seemed not even really to try to do so, once the all-important guarantee of American back-up, signified by American physical military presence, was no longer really guaranteed.

To be sure, permanent guarantees are not inherently illegitimate, but can they be legitimately made in circumstances where the home front commitment is, at most, minimal? Many Americans are rightly appalled by the apparent American unpreparedness and the consequently catastrophic images the word is seeing. But how many American actually would support an open-ended "forever war" commitment?

The theory supporting prolonging the U.S. presence in Afghanistan year after year was that we were developing and empowering a government and military that would in time provide a viable alternative to the Taliban. That theory seems now to have been disproved. The Trump Administration's deal with the Taliban eviscerated the illusion of a long-term American guarantee and so set in motion a process of local, then provincial, then finally national surrender. The only surprise is how fat it all happened. All of which suggests that American good intentions inevitably turned into a destructive hubris that thought and acted as if a foreign society and culture could be remade by the sheer force of American insistence. Sadly we have seen this movie before.