What's All This Fuss About Hungary? 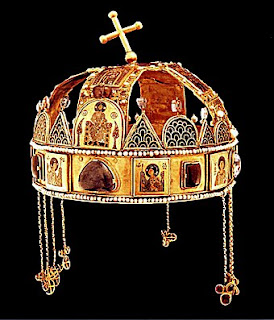 In the Roman Calendar, today is the commemoration of Saint Stephen (967-1038), the first Catholic King of Hungary, who received the Holy Crown of Hungary (photo) from the pope in the year 1000 and was canonized by another pope a mere 50 years after his death. Historically, Hungary has at times been a significant player in the politics of Central Europe, eventually even forcing the restructuring and renaming of the Hapsburg Empire in 1867. Hungary's last king, Blessed Charles IV (Kaiser Karl I of Austria), the last to wear the Holy Crown, could yet join Stephen as a saint of the Church. However, his earthy efforts to recover his throne in 1921 were unfortunately stymied by the self-serving Hungarian Regent, Admiral Horthy (with the connivance of the Entente powers), thus setting the stage for Hungary's eventual alliance with Germany in World War II and its melancholy post-war history.

I first became aware of Hungary in 1956 when the unsuccessful "Hungarian Revolution" and its defeat by Soviet military intervention were big news. After that, we heard about Hungarian refugees, one of whom was a classmate of mine in eighth grade, another of whom eventually became the bishop who ordained me a priest in 1995. For all my fondness for Hapsburg history, I had little or no interest in their Hungarian connection until my 2001 visit to Budapest, where I said Mass in the Matthias Coronation Church (Buda Castle's Church of the Assumption) and climbed the 100 or so steps to see the Holy Crown on display in the Hungarian Parliament building. Post-communist Hungary is now an EU member state. And, since 1999, it is also a member of NATO. That said, it is a small, landlocked country of at most modest importance in Europe, let alone the world.

Yet, Hungary has become a subject of some considerable fascination in the world of political punditry - both right and left. For some on the right, it has become a place for pilgrimage - most recently by Tucker Carson himself. That in turn has heightened hostility to Hungary's current autocrat on the part of the left.

How bad a tyrant Viktor Orban, Hungary's dictator, is something that can, of course, be debated. That he seems like the sort of ruler a Trump tends to be attracted to accounts for much of his current "culture war" significance. Obviously, he has garnered a lot of attention because of his hostility to immigrants. Of course, unlike those trying to enter the United states, few if any immigrants actually want to settle in Hungary. Hardly anyone actually wants to go to Hungary. All of which makes Tucker Carson and company's fawning worship of Hungary's otherwise unimportant dictator so strange - and so significant.

Twentieth-century American "conservatives" spanned the spectrum from ideological libertarianism to neo-liberal capitalism to nostalgia for "traditional" social arrangements. Now, however, as it has degenerated more and more into a "populist" personality cult, what passes for "conservatism" in America is increasingly become a vehicle for hostility to traditional American values and institutions and admiration for anti-democratic but otherwise unprincipled dictators.

Sadly, Hungary has had to endure a very bad century - from the the brief but traumatic communist takeover that followed the tragic fall of the Hapsburg Empire, through Admiral Horthy's tyranny and alliance with Nazi Germany, through 45 years of Soviet domination, to Viktor Orban's performative authoritarianism.

That said, it is the increasingly cruelly authoritarian, anti-democratic, and anti-American character of contemporary American "conservatism" that poses such a great danger to American society and institutions. Right-wingers' performative worship of petty dictators like Viktor Orban is a symbolic way of expressing that anti-democratic and anti-American authoritarianism and cruelty. That is what this is all about - not Viktor Orban, about whom the less said the better.