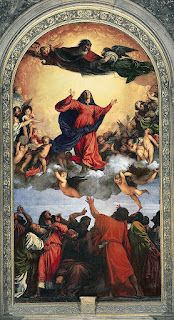 In modern Italy, the mid-August holiday is known as Ferragosto, which comes from the Latin Feriae Augusti, a holiday in honor of the Emperor Augustus. After Rome had become Christian, they kept the holiday and its royal resonance, but they refocused it on the Assumption of the Blessed Virgin Mary - the ancient belief of the Church “that the Immaculate Mother of God, the ever Virgin Mary, having completed the course of her earthly life, was assumed body and soul into heavenly glory" [Pius XII, Munificentissimus Deus].

To an ancient Christian audience, already well acquainted with the Old Testament, the identity of the woman in today's somewhat strange 1st reading [Revelation 11:19a; 12:1-6a, 10] would have been obvious. She is Israel, God's Chosen People, bringing to birth the Messiah, thanks to whom Israel has been expanded now to include all nations and peoples in a new and enlarged People of God, the Church, which continues the task of bringing Christ into the world. It is easy to recognize the story of the Church in the image of this woman - and equally easy to see her symbolized by Mary, the mother of Jesus. In Mary's prayer in the Gospel we just heard [Luke 1:46-55], Mary united herself with God's actions on our behalf and invites us to identify ourselves too with God's plan for the world.

Now that the Risen Christ has ascended to his throne in heaven, the Church remains behind, still suffering from all sorts of evils, but full of hope and confidence in the future.

But, meanwhile, we are still surrounded on all sides by so much bad news. Our world is full of natural and human-made disasters – climate change, economic crises, once stable societies unravelling, once-trusted institutions breaking down, as well as inexplicable personal tragedies and a persistent pandemic that we never seem able to escape from completely.

In our world now, in which death always appears to have the final word, what we hope to be appears at best as a hope, at worst just a wish.

But the wish has been transformed into hope by Christ, the first of all the human race to be raised from the dead, or, as Saint Paul puts it, the first fruits of those who have fallen asleep [1 Corinthians 15:20-27]. In ancient times, the springtime offering of the first fruits signified the dedication of the entire harvest to God. So the resurrection of Christ (which took place on the day of the offering of the first fruits) points ahead to the final resurrection of all those who belong to Christ. By raising Jesus from the dead. In Christ, God has given us an alternative future. And, in Mary, Christ's resurrection has, so to speak, become contagious.

Today, Mary magnifies the Lord on high. She has already led the way for us in being there. May she now also show us how to get there.  For where she is, there we hope to be.

Homily for the Solemnity of the Assumption of the Blessed Virgin Mary, Saint Stanislaus Church, Pleasant Valley, NY, August 15, 2021.