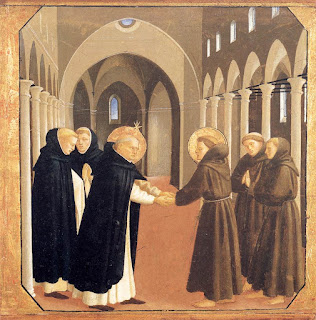 Today is the 800th anniversary of the death of Saint Dominic, on August 6, 1221. As so often happens in the history of the Church, Dominic was the right person at the right time. In the words of Isaac Hecker: "Every age of the Church has its own characteristic form of expression. There is something about the sanctity of each age peculiar to itself." In the high middle ages, this found fullest expression in "Dominic and Francis, who with their mission of newer knowledge and fresher love went forth and met the errors and vices of their age, attracting men's hearts anew to religion and the service of God" [Sermon, The Saint of Our Day, 1863].

In Dominic's day, many people were increasingly attracted to forms of religious expression which seemed more apostolic and evangelical, more reflective of the image of a pilgrim Church. Unfortunately this frequently expressed itself in unorthodox versions of this quest, such as the Waldensians and the Albigensians. A critical combination of factors contributed to this, notably the widely perceived shortcomings of many of the clergy and the appalling absence of adequate catechesis and doctrinal formation among most laypeople. It has been alleged that many who embraced heretical movements were largely ignorant of the orthodox Catholicism that they were ostensibly abandoning. Perhaps not that much has really changed in these 800 years?

The proper Preface used in the Dominican Rite for this feast refers to the revival of the apostolic way of life through Saint Dominic. Born in Castile in 1170, Dominic started as a cathedral canon. As such, in 1203 he accompanied his bishop to Denmark, where he had been sent on a mission by the king. En route, they stopped in Toulouse, where he spent a night successfully persuading an Albigensian to return to the Church. From this and subsequent experiences emerged Dominic's distinctive vocation to combine doctrinal seriousness and an apostolic style of life, embodied eventually in his Order of Preachers (The Dominicans). At that time, it was still the case that the only "ordinary" preachers were bishops. Hence the famous anecdote, recounted in a 14th-century sermon by Blessed Jordan of Pisa, about Pope Innocent III asking, "Who is this man who wants to found an Order consisting entirely of bishops?" Dominic didn't desire to be a bishop, but he did found a distinct Order, he and his companions basing themselves on the Rule of Saint Augustine. Compared with other communities, the Dominicans were distinctive in the manner in which freedom for mission was prioritized over observance.

As a mendicant community, attached to no one particular place (unlike monks), the Dominicans went where their preaching was needed. As a preaching order, they gave a high priority to study and became an important part of the high medieval development of scholastic philosophy and theology in Europe's new universities. Hence the permanent prominence of the two great medieval Dominican Doctors of the Church, Saint Albert the Great (1200-1289) and Saint Thomas Aquinas (1225-1274).

Along with the friars, women have long been part of the Dominican Order - from the beginning as cloistered Dominican nuns and later additionally as active Sisters, e.g., Saint Catherine of Siena (1347-1380). Like many Catholics of my time and place, I was educated by Dominican Sisters in elementary school. The Sisters, whose religious initials were OP (Ordo Praedicatorum, i.e., "Order of Preachers"), were sometimes referred to - more humorously than maliciously - as "Our Problem." Actually, they were dedicated educators and among the most positive formative influences in that time and place. After all, it was Sisters, the Church's closest approximation at that time to an apostolic way of life, who made Catholic schools a cornerstone of 20th-century American Catholic experience.

Dominic was canonized in 1234 by Pope Gregory IX, who declared: "I knew him as a steadfast follower of the apostolic way fo life. There is no doubt that he is in heaven, sharing in the glory of the apostles themselves