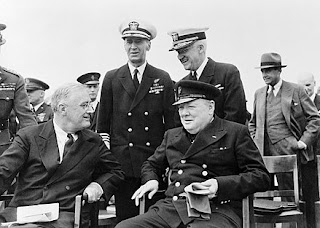 That the United States and the United Kingdom enjoy some sort of "special" relationship was probably unavoidably built in to the circumstances of American history. Thus, in the 19th century, when asked to name the single greatest fact in modern political history, the German statesman Otto von Bismarck is reported to have said: "The inherent and permanent fact that North America speaks English." In terms of this fact's impact upon Germany in two 20th-century wars, Bismarck could hardly have been more prescient.

Eighty years ago this week (August 9-12, 1941), Bismarck's fear found further fulfillment in the famous on-ship wartime meeting between FDR and Britain's Prime Minister Winston Churchill, that led inexorably to Allied victory in Word War II and a post-war world in which the "Atlantic Alliance" has been an important pillar. That famous meeting was part of America's downpayment on the hope Churchill had expressed so eloquently in his famous post-Dunkirk speech in the House of Commons on June 4, 1940, when he promised to "carry on the struggle, until, in God’s good time, the New World, with all its power and might, steps forth to the rescue and the liberation of the old."

The 1983 TV miniseries Winds of War portrayed the Roosevelt-Churchill meeting as a "Changing of the Guard" from the declining British power to the rising American power. It was that, of course, with all the stresses and stains that inevitably accompany such a "changing of the guard, a shift soothed in so many ways by the two powers' common language, shared history, and cultural closeness, expressed ritually by the two leaders through the joint church service they celebrated on the HMS Prince of Wales. (That cultural closeness continues to show itself in all sorts of ways, not least in the obsessive fascination Americans continue to have for the British royal family, compared to their almost complete indifference to most other European royalties.)

It is often alleged, not incorrectly, that the "special relationship" has meant more to the British than it has to Americans. Whatever else may happen, however, American audiences can be counted on to stream expectantly each new season of The Crown and eagerly watch reruns of Downton Abbey. But, beyond that cultural fascination, are there other aspects of the "special relationship" we Americans might profit from attending to?

One obvious aspect of British politics that is often pointed to in conspicuous contrast to the U.S. is the fact that Britain's Conservative Party displays little or none of the American Republican Party's ideological backwardness on climate change and other cultural issues. This, of course, is also true of continental conservatism, especially in its post-war Christian Democratic form. On most such matters, the U.S. Republican party and whatever is left of the American conservative movement have been real outliers. Of course, "conservatism" is a vague and malleable concept. Even so Americans might well learn from its much healthier expressions of on the other side of the Atlantic.

It is true, of course, the U.K. has succumbed somewhat to the cultural and class conflicts, especially in response to globalization, that are recognizably similar to some of the current tribal divisions in the U.S. The vaguely termed phenomenon of "populism" is evident in Britain (as elsewhere on the continent). Even so, it seems that the British may be managing it better. For all the popular superficial comparisons, Prime Minister Boris Johnson is not another Donald Trump and, whatever his limitations, has at least managed to get majority support (something trump never did) and to govern his country much more effectively than Trump did ours. Of course, one reason this has been possible has also been Britain's sensible parliamentary form of government in which the chimera of "bipartisanship" does not exist to stifle the expressed will of the voters.

The contemporary U.K. does, however, suffer from a very specific and dangerous variety of tribalism in the form of an old-fashioned, legitimate localism which has been dangerously distorted into separatism, especially in Scotland. Of course, Scotland has long maintained not only its distinctive cultural identity within the United Kingdom, but also its own legal system, religious establishment, and educational system. Scotland's distinctiveness was more recently reinforced by devolution. Perhaps, an even better approach might have been a more complete federalization of the UK, with each of its four components - England, Scotland Wales, and Northern Ireland - enjoying an appropriate level of recognized local autonomy.

But there is healthy federalism, and there is unhealthy federalism. The desire to maintain Scotland's distinctive legal, religious, and educational institutions reflects a desire for a healthy federalism. But the bizarre idea that Scotland, with less than 10% of the UK's population should have been able to veto Brexit, would represent an unhealthy form of federalism. That unhealthy form of federalism is, incidentally, what the U.S. suffers from - a system in which, especially by means of the Senate, an ever decreasing minority of voters can veto the manifest will of the majority. Thus, although Republican senators haven’t represented a majority of the U.S. population since at least the 1990s, still the Republican party controlled the Senate from 1995 through 2007 and again from 2015 until 2021 - and for at least as long and the Democrats remain too cowardly to abolish the filibuster, continue in effect to control the Senate even now.  James Madison has often been called "the Father of the Constitution," but he was not alone in being most especially disheartened by the compromise which gave each state equal representation in the Senate. The U.K. would be well advised to avoid traveling down the path of such unhealthy American federalism.

While our unhealthy, distinctively American form of federalism remains a perennial American weakness, Bonapartism would seem to be a more immediately pressing problem. The American attraction to British culture means that via The Crown, many more Americans are aware, than might otherwise be the case, of the story of Lord Mountbatten's alleged flirtation with a right-wing coup against Harold Wilson's government. The accuracy of The Crown's depiction has been challenged, and we will likely never know the full story, but it seems evident that something was seriously amiss. And, as Alex von Tunzelmann has suggested in Indian Summer: The Secret History of the End of an Empire, it likely was some form of personal intervention on the Queen's part that put an end to it.  That is a good argument for the healthy British institution of constitutional monarchy (a perduring healthy political institution which we Americans have been deprived of by our distinctive history.) For the U.S. even without the protection of a monarchy, this highlights the value of and need for strong constitutional guardrails and a healthy "deep state" that is committed to maintaining those guardrails. Recent events in the US in the destructive final year of the Trump presidency have once more reminded us of this.

The reality of the often over-hyped "special relationship" never matched its myth. But we have long shared a lot; and we can, if we are willing, to continue to learn from one another.