The Challenge of Inculturation – In Small Things and Great 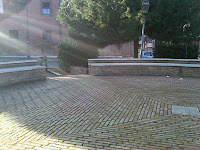 “When you live in a foreign country, you should expect that some things will be different.” So spoke a certain priest to me the first time I visited Rome in 1990. How right he was – and is – and not just in the big picture things but in the little things of daily life. Take, for example, learning how to use the vending machine at the Pontificia Universita Urbaniana, where I go every day for my “studium.”

I like to allow myself plenty of time to get there – just in case the bus is slowed down by a political demonstration on the Corso, and also so I can climb the hill at a relaxed pace. With time still to spare when I reach the top, I stop across the street from the University entrance in the Parco (as the phto suggests, only notionally a “park”) Cardinale Antonio Francesco Orioli, to take a break, sit down, and pray None. Then, after the much more modest incline of the uphill walk within the University campus, I arrive at the appropriate building. Before taking the elevator to the 3rd floor, I stop to buy a coffee from the vending machine.

The first time, I managed to figure out how much money to put in, and which series of buttons to press to order the kind of coffee I wanted, but couldn’t figure out when it was finally ready and so removed the cup too quickly, ending up with milk and sugar but no coffee at all! Studying the machine more carefully the next time, I learned to wait until an easy-to-miss indicator light said “Bevanda Pronta” (“Drink Ready”). And, by the 3rd or 4th time, I’d finally figured out the button that reduces the amount of sugar to the desired level!

If adapting to such simple stuff is such a challenge, what does that say the larger pastoral and evangelizing challenge of inculturation in different societies? I experienced that challenge at the very beginning of my priesthood when I served at our parish in Toronto, Canada. The superficial similarity suggested by a common language might easily mask the fact that something significant happened in 1776 and that the U.S. and Canada are quite different. Someone once called Toronto “a cleaner New York with crowns on the buildings.” Such superficial similarities might mask the two countries’ very different histories and significant cultural differences – rendering the pastoral challenge of inculturation simultaneously easier and more difficult. Even in the U.S., serving first in a predominantly Hispanic parish and later in a parish with a more modest but still significant Hispanic ministry, I had to adapt in all sorts of ways, while simultaneously struggling with linguistic limitations.