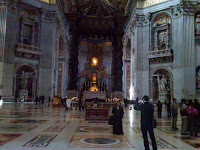 Back in the early 1970s, my senior-year American Political Thought professor, distinguishing between archetypically Catholic and Protestant approaches to life and politics, highlighted how Catholicism is in so many respects a "baroque" religion - elaborate, expressive, sensuous, visual, etc. One need not visit Rome to recognize this. These characteristics remain deeply woven into the fabric of Catholic spiritual and devotional life (however impoverished these may have become in some places in recent decades). And, of course, any trip to any historically Catholic country - e.g., Spain or Austria - will dramatize that dimension, as well as Rome will. Rome is, however, the heart and soul not just of the Catholic Church not just as community of faith and religious practice, but also of Catholicism as a sensibility - something which may even outlast faith and religious practice. It is such a sensibility that pervades this city. For all its up-to-dateness as part of a post-modern, secular, commercially driven European world, Rome remains deeply baroque in spirit. Faith and devotion may indeed waiver, but Catholicism's baroque sensibility still defines this city.
In You Lost Me: Why Young Christians are Leaving the Church ... and Rethinking Faith, David Kinnaman argues that "the next generation's disconnection [from 'historic Christianity, which insists that following Jesus is a way of life'] stems ultimately from the failure of the Church to impart Christianity as a comprehensive way of understanding reality and living fully in today's culture."
Obviously (as the sad situation of contemporary post-Christian Western Europe abundantly illustrates), it take more than the survival of a baroque sensibility to revitalize faith. I do think, however, that the re-evangelization of the Western world (here including also the U.S.) does require something from us more than the linear didacticism of proclaiming the Word. Somehow, religion has to make its way back to the central core of ordinary life - precisely the area from which it seems increasingly estranged. somehow, we as Church must re-learn how to help the people of today to de-compartmentalize their lives and re-integrate (in baroque fashion) the areas of life that matter most to most people most of the time - love, relationships, work, play - not in instrumental ways, but in interconnected patterns that have room for multiplicity and variety and from which the path to God (actually the path of God's grace present to us in all life's complexity) is not excluded and remains constantly open.
Posted by City Father