Musings in the Ruins of Ancient Rome 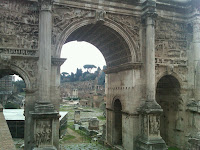 This morning was cold and wet – not the best morning for outdoor sightseeing. Even so, I took the Metro to the Colosseum and then walked along the Via dei Fori Imperiali, which connects the Colosseum to the Piazza Venezia. Originally built by Mussolini as the Via dell’Impero to add more majesty to Italian military parades, the new street contributed to the excavations of the 5 Imperial Fora – that of Julius Caesar, and those of the Emperors Augustus, Vespasian, Nerva, and Trajan – all additions to the original Roman Forum necessitated by the increase in the City’s size and population under the Empire. With the demise of the ersatz Italian “Empire” of the 1930s and 1940s, those ancient imperial Fora provided the street with its present name.

Meanwhile rising above the ruins of that great but long dead empire stand the many monumental churches built by the empire’s successor. At the end of the Via dei Fori Imperiali, for example, there is the church Santissimo Nome di Maria al Foro Traiano. As for Trajan’s Column, erected to commemorate the Emperior’s victory in the Dacian Wars, it still stands in front of the church just west of Trajan’s Forum, but the Emperor’s statue disappeared centuries ago, and the 125-foot column is now topped (since 1587) by a bronze statue of St. Peter.

Just south of all this is the area of the original Roman Forum and the Arch of Titus, commemorating his conquest of Jerusalem. I explored the Forum in detail on my first trip to Rome two decades ago and may well do so again, but today was not a day for that. So instead I climbed the Capitoline Hill (Campidolglio), the smallest but most famous of Rome’s “Seven Hills,” the religious and political center of ancient Rome and still the seat of the city government. At the top of the hill, the Piazza del Campodoglio, designed by Michelangelo, reflects the modern orientation of the city, with the Palazzo Senatorio facing north, its back to the ancient forum. At the northwest end of the Campidoglio originally stood the Temple of Jupiter, the largest of the ancient Roman Temples and the terminal point for Imperial Triumphs – its site now dominated by that modern (1911) neo-pagan Temple to the triumph of the secular liberal state, the monument to King Vittorio Emmanuele II. Abutting that modern monument, however, occupying the highest spot on the hill on the site of the original Roman citadel is the ancient and beautiful Basilica of Santa Maria in Aracoeli, which gets its name from the tradition that it was there that the Tiburtine Sybil predicted to Augustus the coming of Christ with the words, Ecce ara primogeniti Dei. And as we all learned long ago in 1st-year Latin class, it is also the site where the sacred geese alerted the Romans to an imminent attack by the Gauls in 390 BC.

Back down the hill towards the forum is the site of the Mamertine Prison (S. Pietro in Carcere), where Saints Peter and Paul were once confined. I ended my morning in the heart of ancient Rome recalling Isaac Hecker’s visit there in 1857:

“Wednesday I said Mass in the Mamertine prison, in which St. Peter was confined by the order of Nero; and also St. Paul. The pillar is there in which they were chained, and the fountain remains which sprung up miraculously at their feet, in whose waters they baptized their gaolers and twenty-seven soldiers. There were with me four American students, and you can easily imagine that I prayed earnestly in Holy Mass to obtain or us all the zeal of the Apostles for the conversion of our country” [From a letter to Mrs. George V. Hecker, November 7, 1857].