On the 40th Day of Christmas 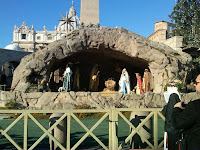 Rome’s several hundred churches are justly famous for their history, for the saints whose relics are venerated there, and for their artistic treasures that draw admirers from all over. Additionally, during the Christmas season, each church features its own distinctive presepio (nativity scene) – often comparable artistically to the mosaics, paintings, frescoes, and sculptures that surround them. Not just tourists but regular Romans visit the different churches during this season to admire them. But, with the feast of the Presentation of the Lord on this the 40th day of Christmas, the Christmas season finally comes to an end, and the presepe disappear for another year.

This is a very ancient feast, which incorporates several interrelated themes, reflected in the different names given to this day. All these different names illustrate how full of meaning this festival is, and how much it has to teach us.

In the Western Church, today is currently called officially the Presentation of the Lord; but for several centuries it was the Purification of the Blessed Virgin Mary. When Jesus was 40 days old, Mary and Joseph journeyed to Jerusalem according to the law of Moses (see Luke 2:22-40), that is to say, in obedience to God’s law, in order to observe two important religious obligations. The first - the ordinary obligation to be purified after childbirth - reflected ancient beliefs about the sacredness of blood. Life was believed to reside in the blood, which was, therefore, something sacred and mysterious. Hence, any direct contact with blood required ritual purification. The second concerned the special status and religious responsibilities of a first-born son (because of God’s having spared Israel’s 1st-born at the time of the Exodus). Jesus, Mary, and Joseph’s participation in these rituals invests them with a universal significance – highlighting for us, first, the inviolable sacredness of all human life, and, second, the special status (and corresponding responsibilities) which now define our entire lives as adopted sons and daughters of God the Father, because of our identification with his Son’s life, death, and resurrection.

Whether officially titled the Presentation of the Lord of the Purification of the Blessed Virgin Mary, however, the most common popular title for today’s celebration in the West has consistently been Candlemas Day, because of the Blessing of Candles and the Procession - originally in Rome an early pre-dawn procession – with which today’s Mass begins.

The name Candlemas calls attention, obviously, to the blessed candles, but also to their light – and to the One whom that light symbolizes. The Church’s official ceremonial books says that “on this day Christ’s faithful people, with candles in their hands, go out to meet the Lord and to acclaim him with Simeon, who recognized Christ as ‘a light to reveal God to the nations. They should therefore be taught to walk as children of the light in their entire way of life, because they have a duty to show the light of Christ to all by acting in the works that they do as lighted lamps” (Ceremonial of Bishops, Part IV, chapter 2).

A secular version of Candlemas is “Groundhog Day.” Not so long ago, everyone in the western world knew about Candlemas Day. Today, many people – even some Catholics seem to have forgotten. Yet even people who have never heard of Candlemas recognize the folklore connected with this day and connect it with the change of seasons. While the weather is still wintry, the days are noticeably getting longer. Whereas Christmas comes at the mid-point of the winter’s darkness, with the year’s shortest day and its correspondingly longest night, Candlemas comes at the mid-point between the winter solstice and the spring equinox, the transition (according to one traditional way of reckoning the seasons) from winter to spring. Soon, day and night, light and dark will be equal. So this last of the winter light festivals invites us to look ahead to what these winter light festivals are meant to symbolize.

Today we recall with joy the Lord’s entry into his Temple: and suddenly there will come to the temple the Lord whom you seek (Malachi 3:1-4). At the same time, we hear, in wise old Simeon’s words to Mary, the first reference to what lies ahead, the first reference to the cross. Behold, this child is destined … to be a sign that will be contradicted – and you yourself a sword will pierce – so that the thoughts of many hearts may be revealed. So, even as we take a last look back at winter and Christmas, Candlemas looks ahead to spring and to Lent, and reminds us that the point of Christmas is Easter. Simeon and Anna’s encounter with the infant Jesus in the Jerusalem Temple points us toward our own encounter with the Risen Christ here and now.

In the Eastern Churches, this day is appropriately called the Encounter, the Feast of Meeting. Today, Christ comes to meet us, and we in turn get to meet him. Every Christmas we encounter Christ in a special way in the image the infant Jesus in the manger. When we encounter the infant Jesus in the nativity scene in church and at home, we appreciate anew the great mystery of the incarnation of God’s Son. When Simeon and Anna experienced in the infant Jesus the human face of God, they spoke about the child to all who were awaiting the redemption of Jerusalem. They hastened to proclaim & share their good news. That remains our task today – to take the light of those candles out into our spiritually still so very dark world, and so to share with all the light reflected in our own lives from the brightness of the human face of God.