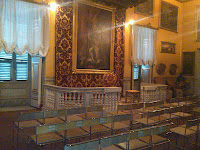 Now that it’s convenient to get around again, this morning I walked down the Via Bissolati and the Via San Basilio to Piazza Barberini, and then from there down the Via del Tritone to its end. There I visited two churches. The first, the Servite Church of S. Maria in Via, enshrines a famous Madonna found in a well by Cardinal Capocci in 1256. (One can still drink water from the well in the Madonna chapel).The second, S. Claudio in Piazza S. Silvestro was originally the national church of the Burgundians and was rebuilt in the 18th century. The Blessed Sacrament Fathers have staffed it since 1886, and the body of their founder St.Peter Julian Eymard (1811-1868) is venerated there.

Since there were no political demonstrations today, after a quick cappuccino I crossed the Via del Corso to take in the Piazza Colonna, adjacent to the Italian Parliament. The column referred to is a tall Roman Victory Column in Doric style built in A.D. 193 in honor of Emperor Marcus Aurelius’ victories and modeled on Trajan’s Column. Just as Trajan’s Column is now topped by a statue of St. Peter, this one is topped by a statue of St. Paul.

From there, I stopped at the Piazza di Pietra to admire what remains of the Temple dedicated to Emperior Hadrian, buit by his son, Antoninus Pius, in A.D.145. Just south from there is the Piazza S. Ignazio, where I visited the beautiful Jesuit Church of S. Ignazio and venerated the relics of St. Robert Bellarmine. Back on the Via del Corso, I visited the church of S. Marcello, built over the supposed site of the prison where Pope St. Marcellus was confined in the early 4th century. Destroyed by fire, the church was completely rebuilt in the 16th century. Its famous 14th-century wooden Crucifix, which alone survived the fire, is venerated in a chapel in the church.

Finally, I crossed the Corso to the Palazzo Doria-Pamphilj, where an amazing museum housed in part of that princely Roman family’s palazzo. Among the famous members of that (originally Genoese) family was Emperor Charles V’s Admiral Andrea Doria, after whom the ill-fated Italian ocean liner was named. (The Church of S. Agnese in the Piazza Navona, which the Paulists were allowed to use as the temporary American Church while S. Susana was being repaired in the late 1980s-early 1990s, was owned by Princess Orietta Doria-Pamphilj. Her father, Prince Filippo Andrea VI Doria Pamphilj, was appointed Mayor of Rome after the city's liberation by the Allies in 1944, thanks to his strong anti-Fascist credentials).

The multitude of paintings and sculptures on display in the museum – too much perhaps for the non-expert to absorb all at once - is considered the most important of the Roman patrician art collections to have survived to the present. I was actually as interested in the elaborate state rooms themselves, with their furniture and family portraits. I also noticed in the Sala del Trono that the Throne was turned backwards. If my history is correct, I believe that was common among the Roman Nobility in the years after 1870, as a way of recognizing the Pope as still the legitimate sovereign of Rome, whose throne they believed had been usurped by the Italian King in the Quirinale.