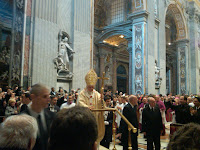 The Consistory festivities continued this Sunday morning with a Mass at the Papal Altar in St. Peter’s, at which the new Cardinals concelebrated with the Pope. Earlier, Santa Susanna had secured tickets for me and my former Pastor from New York to serve as ministers of Holy Communion at the Papal Mass. So once again – but this time in choir dress - we went very early to St. Peter’s. After another wait in the cold Piazza, we were admitted to the Basilica and went directly to the Chapel of the Blessed Sacrament, where we joined other priests from around the world – among them several friends from New York. While the Rosary was being recited in the Basilica before Mass, we were taken past the Altar of the Chair (illuminated for the occasion with scores of candles) to our seats just behind the Papal Altar built above the Tomb of St. Peter. Once again, the silver trumpets sounded and the Sistine Choir chanted Tu es Petrus, as the Holy Father accompanied by the 22 new Cardinals began the Mass for the (anticipated) feast of the Chair of St. Peter (transferred in Rome this year because February 22 falls on Ash Wednesday this year).

When one assists at a pontifical liturgy, it is easy to get caught up in the choreography of it all. All we ministers of Holy Communion needed to do, however, was follow a few basic instructions and otherwise go where we were told. So it was possible to enter fully in the spiritual and esthetic experience. I have to say I was really overjoyed to get to sing Credo #3 - the standard setting of the Latin chant of the Creed that we routinely used when I was growing up!

At the Preparation of the Gifts, we were each given a ciborium and took our places on either side of the altar – amazingly just a few feet from the Pope himself. Then, at Communion time, we went, each to his assigned station. After Mass, we joined the even greater throng outside in the Piazza for the Pope’s weekly Angelus message and Blessing. .

The combination of the consistory and the feast of St. Peter's Chair highlighted for me the special sense of grace I always feel in St. Peter's Basilica, the sense of being at the heart of the Church.in the proximity of St Peter's tomb and in the presence of his Successor.

All in all, this was certainly one of the most exciting, awe-inspiring Sundays of my entire life!