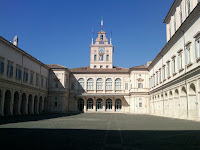 Walking past the Piazza del Quirinale yesterday, I discovered that the Quirinale Palace is open to the public for a special exhibit in honor of the last year’s 50th anniversary of Italian unification. The exhibit ends in March – as does my stay in Rome. So this morning I decided to take advantage of this unexpected opportunity to experience the inside of one of the great palaces of Europe.

The Quirinale is the highest of Rome’s historic seven hills. Its name may be derived from a Temple of Quirinus – the name of Rome’s 1st King, Romulus, after he had been deified. Its elevated location made it a desirable site especially in summer. So a palace built there in the 16th century became the summer palace of the popes. It was the site of several conclaves, the last being that which elected Blessed Pope Pius IX in 1846. After the Italian conquest of Rome in 1870, it was confiscated from the Pope to become the principal residence of the King of Italy. From the perspective of the palace, the exhibit chronicles the reigns of Italy’s 4 kings – Vittorio Emmanuele II (1861-1878), Umberto I (1878-1900), Vittorio Emmanuele III (1900-1946), and Umberto II (1946), and their successors, the Presidents of the Italian Republic since 1946.

Located in some of the palace’s elegant state rooms, the exhibit focuses on the history in which the palace has been at the center – not on the actual art and architecture of the place. Even so, one does get to see some nice rooms, culminating in the elegant, early 18th-century Sala dei Corazzieri, from which one can at least look through the open door into the Cappella Paolina, the former Papal Chapel, which is the same size as the Vatican’s Sistine Chapel.

Now used primarily for concerts, the Cappella Paolina remains a permanent reminder of the palace’s original occupants and primary purpose. Its baroque splendor recalls its origin in the post-Tridentine, Counter-Reformation era – one of the greatest periods of missionary outreach in the Church’s history. After the Italian confiscation of the palace, the chapel remained as a witness to remind its new royal residents that they were (as indeed they tragically turned out to be even in the short-term) ultimately only temporary sovereigns in this Eternal City.

One of Europe’s oldest houses, the royal House of Savoy had a complex relationship with the Church – as simultaneously custodians and protectors of the Holy Shroud and promoters of secular Liberalism. (On the other hand, at least two royal Savoy women in this period of Italian unification and after – one 19th-century princess and one 20th-century queen – are now Servants of God!)

The Savoys’ post-war republican successors in the Quirinale, for all the historic splendor and symbolic resonance of their residence, have been but party politicians, presiding over an increasingly dysfunctional society still not even completely reconciled to the Savoys’ supposedly successful project of national unification.

From Popes to Kings to Presidents! For the stately Quirinale it seems to have been a steadily downhill trajectory!