Getting Ready for Lent 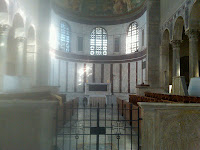 For centuries, the Pope as Bishop of Rome regularly celebrated Mass in different Roman churches on various days of the year. These days included the Sundays of Advent, Septuagesima, and Lent, the great feasts of Christmas (3 Stations), Epiphany, Easter, Ascension, and Pentecost, the Vigils of Christmas and Pentecost, the feasts within the Christmas Octave and the days within the Octaves of Easter and Pentecost, the seasonal Ember Days, the Rogation Days, and all the weekdays of Lent. (89 Masses, if my math is correct) The Seven “Pilgrimage Churches” of Rome featured frequently among these “stations,” of course, but other churches were also included – e.g., S. Maria in Trastevere is the station for New Year’s Day. The many weekdays of Lent obviously offered an additional opportunity to include many other “ordinary’ ancient Roman churches (among them Santa Susanna, which is the stational church for the Saturday of the 3rd week of Lent).

On the day of the station, the faithful once gathered in one church and walked from there in procession to the church where the Mass was to be celebrated that day. A modern version of this is observed on Ash Wednesday, when the Pope and clergy assemble at the 19th-century Benedictine Church of Sant’Anselmo, from which they go in procession to the 5th century Dominican Church of Santa Sabina, the stational church for that day.

The practice died out when the Popes abandoned Rome for Avignon in the 14th century, and was never really revived. It survived in liturgical memory, however, at least until the 1969 Reform deleted the references to the stational churches from the Missal. Often the choices of prayers and readings for some of those ancient Mass texts could be explained with reference to the station. Thus, in the old Missal, the Old Testament reading for the Saturday of the 3rd week of Lent was the Book of Daniel’s story of Susanna – namesake of the day’s station.

Although many of those prayers and readings have been altered and rearranged and so no longer reflect their stational origin, an indulgence is still granted to those who devoutly visit the Roman Stational Church named for that day.

In recent years, there has been an adaptation of the ancient practice during Lent among some of the different language groups in Rome. Thus, the seminarians at the North American College have organized a Mass in English at that day’s ancient stational church each weekday morning of Lent. So for that part of Lent when I will still be here in Rome I hope to join this traditional Lenten pilgrimage on as many days as possible. So tomorrow for Ash Wednesday, I plan to begin my 2012 Lent by concelebrating the stational Mass at Santa Sabina on the Aventine Hill at 6:45 a.m.