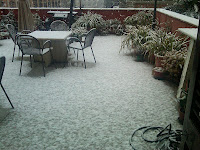 Not too far where I am living is the Papal Basilica of Saint Mary Major (Santa Maria Maggiore) on the Esquiline Hill. Originally built by Pope Liberius (352-366) and restored by Pope Sixtus III (432-440), it houses a painting of the Madonna and Child known as Salus Populi Romani, the Protectress of the People of Rome, and also the supposed relics of the original crib from Bethlehem. It is the Roman “Stational Church” for the 1st and 3rd Masses on Christmas and is where St. Ignatius Loyola celebrated his First Mass on Christmas morning 1538. It is commonly considered the most popular of the papal basilicas among Romans themselves.

According to a later legend, during the pontificate of Pope Liberius, a certain Roman patrician and his wife, being childless, made a vow to donate their possessions to Our Lady. and prayed to her to make known to them how to do so. Our Lady appeared to them in a dream on the night of August 4-5 and requested that they build a church in her honor on the Esquiline hill on a spot that would be covered with snow. She also appeared to Pope Liberius in a dream that same night so that he too would see the miraculous snowfall on the site. And so, during that hot summer night, snow fell on the Esquiline Hill, tracing the form of the future basilica. Many people gathered to see the unusual event, and before the snow had melted they marked the footprint of the future basilica, which was soon quickly constructed. The legend is still recalled annually on the feast of the Basilica’s Dedication (August 5) when a shower of white rose petals falls from the Dome at the end of Mass.

Whatever may be thought about that legend, there was nothing miraculous about today’s snowfall in Rome! It was just winter being winter – albeit more forcefully than usual. This time of year in Rome is typically cold and wet, but it has been relatively mild and dry this winter until this week. It has been cold and snowy over much of Europe these past few days. Still snowfalls are sufficiently rare in the city itself to be considered newsworthy in Rome. Where I come from, of course, this kind of weather may be more common, but it is still serious enough to be a disruption. Already last evening the Mayor of Rome had closed the city’s schools for today (and tomorrow).

I myself made a good faith effort to get to my class. I left earlier than usual; but, by the time I got to the bus stop, my feet were already soaked and I had almost slipped several times. The traffic was completely snarled. It would have taken at least twice as long – or longer – than normal to get to class. And my anxiety about walking up the Janiculum Hill – and even worse walking back down in the dark and then hoping to catch a bus home – finally persuaded me to give up and go home.

This evening, I ventured out to go to church to get my throat blessed. Treading carefully through the icy slush, I saw several Romans - all adults - thoroughly enjoying themselves making and throwing snowballs at each other.

I have always loved snow, which I frankly consider one of the most beautiful of God’s creations. I hate driving in snow (but then, of course, I hate driving, period!) The fact that snow impedes us from carrying out some of our ordinary activities may be a good reminder that winter was intended to slow us down and stop some of those ordinary activities. It’s not winter’s fault if our modern, industrialized economy needs to continue at the same consistently frantic pace all year round. Winter is just being winter!