The City of the Martyrs - and Some Scoundrels Too 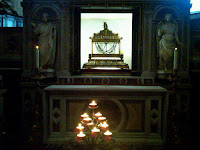 As I mentioned last week, one of my personal spiritual goals this Lent has ben to concelebrate as many of the daily Lenten stational Masses as I can (during those weeks of Lent that I am in Rome.) The Pontifical North American College organizes an early morning English Mass at the appropriate Roman Stational Church on each of the weekdays of Lent. We started on Ash Wednesday at Santa Sabina on the Aventine Hill. Thursday, Friday, and Saturday, the stations were S. Giorgio in Velabro, SS. Giovanni e Paolo, and S. Agostino (where St. Monica is buried). Yesterday, Monday of the 1st Week of Lent, the Station was at S. Pietro in Vincoli, a 5th century basilica, with a 15th-century façade, also known as Basilica Eudoxiana, because founded by Empress Eudoxia to house the two chains St. Peter was imprisoned with. In addition to St. Peter’s Chains, which are visible for veneration under the main altar, the Basilica is perhaps most famous for Michelangelo’s Moses. It also houses the tomb of the famous 15th-century theologican, canonist, and cardinal Nicholas of Cusa (1401-1464), author of De Docta Ignorantia (“Of Learned Ignorance”), whom I first encountered almost 40 years ago in graduate school!

There is something special about going to these venerable Roman churches in the pre-dawn darkness, walking literally in the steps of centuries of Christians who have visited those same churches on those same days, celebrating Mass surrounded by the relics and memories of martyrs, then emerging in the early morning light to continue one’s daily work. It is a true experience of the communion of saints! As the Italian Humanist Petrarch (1304-1374), describing his experience as a pilgrim in Rome in the Holy Year 1350, wrote: “How inspiring for a Christian to journey to that city which is like a heaven on earth, sanctified by the remains of martyrs beyond number, drenched in the precious blood of those early witnesses to the Truth.”

Like all human enterprises, however, down through the centuries Rome too has had its less edifying episodes - as well as any number of colorful historical scoundrels. Thus to reach S. Pietro in Vincoli from Via Cavour, one climbs a stone stairway, Via S. Francesco di Paola, also known as Salita dei Borgia, because it passes under an archway which was part of the house of Vannozza Cattanei, mistress of Pope Alexander VI and mother of Giovanni, Cesare, Lucrezia, and Gioffre Borgia. Giovanni Borgia, Duke of Gandia (who goes by his Spanish name Juan in the TV series), was murdered there in 1497, possibly by one of his brothers.

To add to the charm of that particular place, the stairway is also the site of the ancient Vicus Sceleratus, so named because it was where the wicked Tullia (c. 535 B.C.) drove her chariot over the corpse of her father Servius Tullius (the 6th of Rome’s 7 kings) whom her husband, Tarquinius Superbus, had just overthrown!