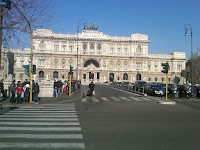 In this morning's New York Times, Gail Collins writes about the Catholic Church's opposition to the recently enacted mandate requiring most employers to pay for medical insurance that covers contraception: "The problem here is that they’re trying to get the government to do their work for them. They’ve lost the war at home, and they’re now demanding help from the outside."
Now if that isn't a good example of getting the story backwards, what is? This isn't about the Church trying to get the government to do anything. It's about the government forcing the Church to do something. Specifically, it is about a particular political class using State power to impose its ideology on the institutions of civil society.
The essence of totalitarianism lies in its elimination (or at least their disempowerment) of all subsidiary social institutions, leaving the individual dependent entirely on the State. The Founding Fathers designed a strong federal government with power to act in the national interest and a constitution adaptable to changing times and circumstances. But they also understood the totalitarian temptation and so added (admittedly as an afterthought) a Bill of Rights. The political class has gotten so used to trying to turn the 1st Amendment against religion that they may have forgotten why it was included in the constitution in the first place, which was, of course, to protect the religious freedoms of citizens from the power of the federal government.
In her column, Collins makes another interesting point, however, with which I am in partial agreement. "In a sane world, the government would be running the whole health care plan, the employers would be off the hook entirely and we would not be having this fight at all. " Indeed, if only the Democrats had been willing to cooperate with President Nixon in 1973 to extend Medicare to everyone! Then we would indeed have had universal health care - and without the baggage of maintaining private insurance! Collins is wrong, however, in thinking that contraception would likely have been included in such national health care coverage. (One of the curious things about that part of the political class's cultural ideology is that, even though its moral ideas are for the most part strikingly novel, it acts as if they were self-evident universally recognizable truths that are just obvious to any normal person!). It is safe to assume, of course, that in the 1970s, the idea of including contraception would have been anything but obvious to most people. And, if the issue had actually arisen, some sort of legislative prohibition - something like the later Hyde Amendment - would almost certainly have been included.
In any case, universal health care remains a genuine public good which the Administration did well to pursue. Given the double danger facing the survival of its health care reform (in the courts and in the election), one would have thought that the Administration would be doing everything possible to build up popular support for it - instead of engaging in ideological grandstanding that, whatever else may happen, will almost certainly result in further undermining the commitment of many Americans to any federal effort to guarantee universal health care
(The photo above, taken from the opposite side of the Ponte Umberto I, is of the Palazzo di Giustitia, located on the west side of the Tiber in Rome. The massive building, derisively referred to by Romans as the "Palazzaccio,"was built after Italy's conquest of Rome to house the new secular law courts. By 1970, this monument to secularism was in danger of collapse and had to be evacualted, but has since been restored.)
Posted by City Father