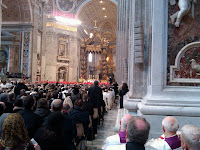 This morning in St. Peter's Basilica, Pope Benedict XVI held what is officially called an “Ordinary Public Consistory for the Creation of new Cardinals and for the Vote on Several Causes of Canonization.” The 22 new Cardinals included two Americans Timothy Dolan (Archbishop of New York and current President of the U.S. Conference of Catholic Bishops) and Edwin O’Brien (Grand Master of the Equestrian Order of the Holy Sepulcher of Jerusalem, previously Archbishop of Baltimore and Archbishop for the Military Services - and like me a native of New York City’s borough of the Bronx).

So, this morning, I and four fellow Paulists, along with thousands of other pilgrims, crowded into St. Peter’s Basilica. After waiting in line in the early morning chill, we were finally inside and seated, with still around an hour or so more to wait. At about 10:20, the silver trumpeters appeared on the Inner Logia above the main door and all the Basilica's lights were turned on. Finally, at precisely 10:30, the trumpets sounded, the choir intoned Tu es Petrus, and the Holy Father entered the Basilica to a great ovation.

During the ceremony, after the chanting of a Gospel pericope (Mark 10:32-45), the Pope delivered his Consistorial Allocution. Then, each new Cardinal made a Profession of Faith and recited the customary cardinalatial oath: I, Cardinal of the Holy Roman Church, promise and swear, from this day forth and for as long as I live, to remain faithful to Christ and his Gospel, constantly obedient to the Holy Apostolic Roman Church, to Blessed Peter in the person of the Supreme Pontiff, and his canonically elected Successors; always to remain in communion with the Catholic Church in my words and actions; not to make known to anyone matters entrusted to me in confidence, the disclosure of which could bring damage or dishonor to Holy Church; to carry out diligently and faithfully the duties to which I am called in my service to the Church, according to with the norms laid down by law. So help me Almighty God.

Each new Cardinal then received the red biretta, signifying his readiness to shed his blood for the faith, and the ring with its images of SS. Peter and Paul (based on the two statues that stand right outside in the Piazza), representing faith and missionary proclamation. Finally each one was assigned his titular church in the diocese of Rome.The Consistory concluded promptly at noon, after doing some cardinalatial business – the approval for 7 Blesseds for Canonization as Saints of the Church on October 21, 2012. Among them are two Americans: Blessed Marianne Cope and Blessed Kateri Tekawitha.

After the ceremony, we headed up the Janiculum Hill (right past the Collegio Urbano where I have my classes) to the Pontifical North American College for a reception in honor of New York's Cardinal Dolan. A former parishioner I knew from St. Paul the Apostle parish in New York is now a seminarian living at the North American. Many New York priests and many Sisters and laywomen with whom I worked 20 years ago in my five years in the Superintendent of Schools Office (including my former boss, who hired me back in 1989) were there. So it was one of those rare opportunities to reconnect with significant figures from an important period in my life!
Finally, later that afternoon, we returned to the Vatican for the traditional visits to the new Cardinals. We duly paid our respects to Cardinal O'Brien, then to Thomas Cardinal Collins (Archbishop of Toronto, where the Paulists also have a parish and where I was for 6 years), and of course Cardinal Dolan of NY.
Posted by City Father