Saint Paul, Preacher of Truth to the Whole World 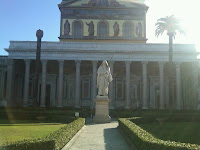 This being the feast of the Conversion of Saint Paul (the patronal feast of the Paulist Fathers and the 26th anniversary of my Final Profession), this morning I took the metro to the Papal Basilica of St. Paul’s Outside the Walls on the Via Ostiense to attend the Pontifical Mass celebrated at the Papal Altar by the Abbot of the Benedictine monastery attached to the Basilica. (The Pope himself will go there later this afternoon to celebrate Vespers. I could have had a ticket; but, of course, I must be in class then!)

Most saints are celebrated on the anniversary of their death. Indeed San Paolo fuori le Mura (the second largest church in Rome) is built on the site of St. Paul’s burial. If a saint was a martyr, that itself is often the saint’s principal claim on our attention. Paul the Apostle was, of course, also a martyr. The Church and Abbey of San Paolo alle Tre Fontane some two miles away mark the site of his martyrdom. The traditional date of his death (together with St. Peter) is celebrated with greatest solemnity on June 29.

But then, every January, we have this additional celebration of St. Paul – unusual not only for being additional, but because it focuses on a particular occasion in his life, the event we commonly call his “conversion.” Monumentally portrayed by Lumen Martin Winter above the main entrance to the Paulist Mother Church in New York City, that event (recounted in Acts 9) transformed Paul the persecutor of the Church into a disciple of Jesus. It also put him on an equal footing with the others to whom the Risen Christ had earlier appeared - in the process exemplifying for us what it means to be converted to Christ, to become a disciple of Jesus, his witness in the world, and an apostle sent with mission to evangelize, to make disciples of all peoples.

Paul was, first and foremost, a devout Jew, well educated in the Law, a Pharisee, that is, a member of the Jewish group most zealous about religious observance. As a disciple of Jesus, Paul never ceased to be a Jew. At the same time, he was also a Greek-speaking Jew, from the Diaspora. (There was nothing unusual about that either. More Jews lived outside of Israel than in it at that time.) He grew up in what is today Turkey, in a Greek city, and enjoyed the privilege of Roman citizenship.

All of this would prove very important, indeed, because one of the great issues which confronted the 1st century Church was figuring out how Jews and Gentiles were connected in God’s plan for the salvation of the world through Jesus Christ – and how they should relate to one another within the one community of the Church. The way this issue was eventually resolved (thanks in no small part to Paul) helped transform what would otherwise have been a small Jewish sect into the biggest and longest-lasting multi-cultural institution in the world - the Roman Catholic Church.

What Paul experienced when he met the Risen Lord on the way to Damascus was a revelation of God’s plan to include all people in the promises originally made to Abraham and his descendents and now being finally fulfilled in Jesus. So what we traditionally call Paul’s “conversion” was not his switching to some other religion. The God who revealed himself to Paul in the person of Jesus was the very same God whom Paul had always served (and served so enthusiastically). What changed was that now Paul recognized Jesus as the Messiah, the Christ, though whom all people are included in God’s plan of salvation.

The converted Paul saw no conflict between Judaism and faith in Jesus. But, because it was Jesus that ultimately mattered, he also came to see no conflict between Gentile culture and faith in Christ. For the pagan peoples of the Roman Empire, that was good news indeed. It’s easy to see why Paul’s mission was so successful among different types of people. The world has changed a lot since Paul’s time, but that mission hasn’t!

Saint Paul had the kind of enthusiasm for the faith that Servant of God Isaac Hecker so much wanted his Paulist Fathers to have, what Hecker repeatedly called “zeal for souls.” Paul’s career as an apostle illustrates how completely Christ can captivate the completely converted Christian. As Blessed Pope John Paul II famously said: “Those who have come into genuine contact with Christ cannot keep him for themselves, they must proclaim him.”

Paul was not one of the original 12. He wasn’t there when Jesus said to his disciples: “Go into the whole world and proclaim the gospel to every creature.” But he absorbed those words as surely as if they had been addressed to him initially – as we also must do.