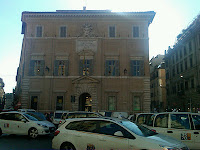 Yesterday, I took the short walk down to the Piazza Barberini and then up the Via Sistina to the French-owned 16th-century church of Trinità dei Monti. The church stands at the top of what are generally known as the “Spanish Steps,” from which highpoint one gets quite a commanding view of Rome facing westward, with the dome of St. Peter’s in the distance. (The “Spanish Steps,” in Italian la Scalinatta de Trinità dei Monti, were built - like the church - with French money, The only thing “Spanish” about them is the Piazza di Spagna at the bottom).

After visiting the church, I walked down the steps to the Piazza, then turned left to the Piazza’s southern end to look at the famous column of the immaculate Conception, which the Pope visits every year on December 8. Then, I noticed on the building behind it the inscription Collegium Urbanum de Propoganda Fide. That interested me because the course I am presently taking uses the facilities of that same Collegio Urbano – now known as the Universita Urbaniana and located about a half-hour away across the Tiber on the Janiculum Hill. I assumed at first that this building had since been converted to some secular use – until I noticed the Papal Flag. Drawing closer I read the notice on the metal plaque attached to the entrance, identifying it as an extra-territorial possession of the Holy See and the office for the Congregation for the Evangelization of Peoples (the modern name for the old Congregation for the Propagation of the Faith).

At that moment, I realized that Isaac Hecker must have come to that very site to solicit Cardinal Barnabo’s assistance following his dismissal from the Redemptorists in 1857!

Two years previously in 1855, Hecker had published his first book, Questions of the Soul, which had established him as one of mid-19th century American Catholicism’s most effective spokesmen. In 1857, he had come to Rome, representing four other fellow Redemptorists and armed (fortunately as it turned out) with supportive letters from leading U.S. Bishops, to make the case for an English-oriented American Redemptorist house focused primarily on missionary outreach. On his arrival, however, his religious superiors determined that his trip had been unauthorized and dismissed him from their Order.

How did Hecker react to this sudden reversal? In a letter to his brother George, written just days after his expulsion, he wrote: “This morning I said Mass in St. Peter’s. Our affairs are in the hands of God. I hope no one will feel discouraged, nor fear for me. All that is needed to bring the interests of God to a successful issue is grace, grace, grace, and this is obtained by prayer, and if the American Fathers will only pray, and get others to pray, and not let anyone have the slightest reason to bring a word against them in our present crisis, God will be with us, and Our Lady will take good care of us.”

Hecker wrote that on September 2. Within a week, he initiated his ultimately successful appeal to the Holy See and had his first interview with Alesandro Cardinal Barnabó, Prefect of the Congregation of Progaganda, which, as the curial body in charge of the Church in mission territories, then had jurisdiction over the U.S. Church. Awaiting the outcome, Hecker actively promoted his case for the Church’s prospects in the U.S. – among other things writing two articles in the important Jesuit journal Civiltá Cattolica. Through it all, Hecker remained enthusiastic about his mission and humbly trusting in God’s grace.

Thus, some months into his ordeal, he acknowledged that what had happened “was the source of the deepest affliction to me,” but concluded “that these things were permitted by Divine Providence in order to place me in the position to undertake that mission which has never ceased to occupy my thoughts.” To his brother in New York, he wrote in December: “All depends on God; in the meantime I keep myself in my humility. …God evidently has been in all these events, and … my stay here has not been useless. Indeed, I know that I am another man from what I was on coming here. No worse, I trust in God, but much better, greater zeal, heroism, submission to God. Indeed this has laid in me the foundations of something much greater than the world imagines – that of becoming a saint; for I am sure my present opportunities on that score are abundant, and, thank God, His grace is more abundant.”