Lessons from the Vittoriano 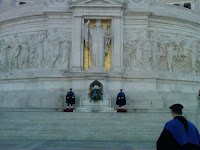 My excursion to the Italian Emigration Museum, about which I wrote yesterday, also afforded me an opportunity to visit the Vittoriano itself (within which the Emigration Exhibit is located). Of course, I have seen the massive monument many times from the outside. (it's not as if one could actually miss it!). But this was the first time I ever actually climbed it ceremonial steps and went inside. (Especially on a beautiful, sunny day such as yesterday, the view of Rome’s skyline from the monument is itself sufficient to warrant the climb – as does also the cappuccino in the monument’s terrace café).

Whatever other emotions the monument may evoke, it immediately impresses one as a grandiose evocation of pagan Rome – in which respect, it is not unlike the United States Capitol building and some of the other major monuments in Washington, DC (e.g., Lincoln, Jefferson). In the American case, the adoption of the ancient Roman model was ideologically inspired. Given its location – literally next to some of the most important ancient Roman ruins – the Roman imagery might seem more “natural” in the case of the Vittoriano, were it not for the fact that the imagery of ancient Rome has not been characteristic of the city of Rome’s most monumental architecture for more than a millennium. The use of Roman imagery in modern monumental architecture typically reflects ideological orientations rooted in either the American or the French Revolution (or both).

The Vittoriano’s original aim was to memorialize the Piedmontese monarch who became united Italy’s first king. It was intended to celebrate not so much the man himself but the movement of Italian unification, patriotically portraying the king as the climax and culmination of the Italian Risorgimento. So it was certainly suggestive that it was built on the Capitoline Hill abutting the heart of ancient Rome. (In the process, several medieval and Renaissance structures were demolished – a destruction which today’s concerns for historical preservation would hardly have countenanced).

Originally dedicated in 1911 for the 50th anniversary of the proclamation of the modern kingdom of Italy, the monument inevitably celebrated in art the triumph of secular modernity that by force of arms had conquered Rome from the Pope in 1870. In such a profoundly Catholic symbolic culture as that of Italy, it is hardly surprising that the monument is permeated by religious imagery, but the imagery in question derives almost entirely from pagan, not Christian Rome. Thus, after the king himself (an idealized equestrian image statue in the long classical tradition – going back at least to Emperor Marcus Aurelius – of portraying the hero on horseback), the most immediately recognizable statue is that of the goddess Roma (modeled evidently on classical portrayals of the goddess Minerva).

Back in 1911, before the pointless political and human tragedy of World War I (whose "Unknown Soldier" is interred directly below the statue of the goddess Roma), it was still perhaps possible to identify secular modernity with an idealized classical antiquity and to imagine that it was truly ushering in an age of genuine human progress, prosperity, and peace. The tragic history of the century since then has exposed that ideology for the lie that it is.